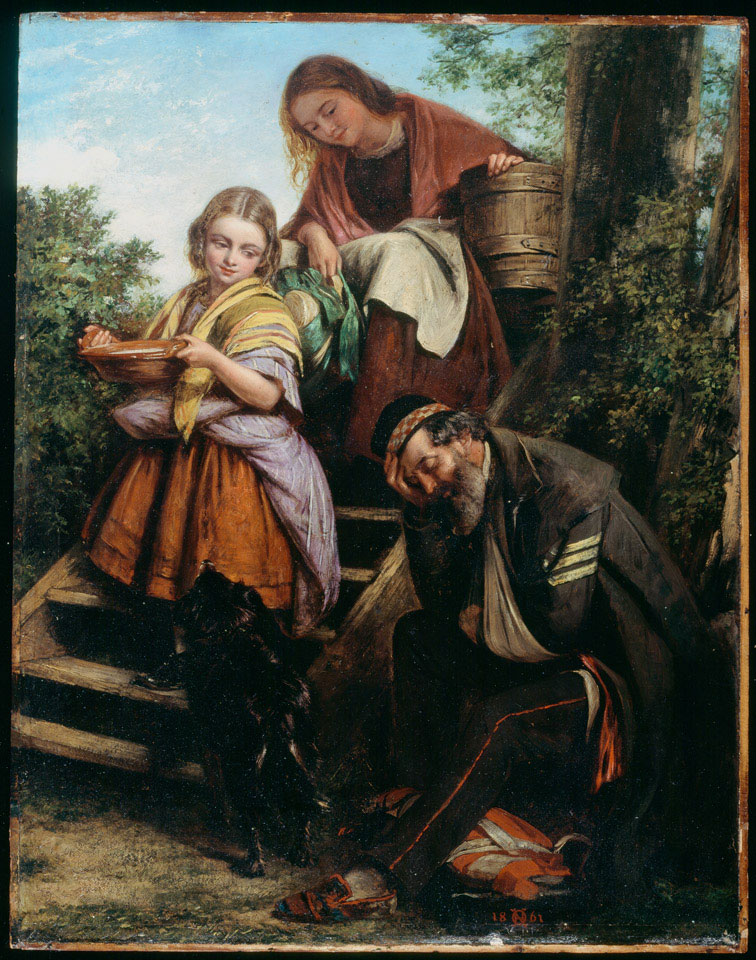 A tired and injured veteran sits slumped beside a stile, while a woman and child bring him food. Presumably discharged from military service due to disability, the sergeant appears without means even to buy civilian clothes. He wears an assortment of regimental clothing, including a glengarry (forage cap) of the 93rd (Highland) Regiment of Foot.

This painting was almost certainly intended as a continuation of O'Neil's famous pair of narrative paintings, showing troops leaving for and returning from the Indian Mutiny (1857-1859), 'Eastward Ho! August 1857' and 'Home Again'. In 'Home Again', the highlander is seen distressed by a 'Dear John' letter. He appears here having become a vagrant, reliant upon charity.

During the nineteenth century, the treatment of ex-servicemen brought the Army much adverse publicity. As late as the 1890s, one-third of those discharged on medical grounds received no pension. Small invalidity pensions were only granted if there was proof that sickness or injury was a direct result of military service or, in some cases, to those who had served a minimum of 14 years. Soldiers usually enlisted for 21 years, although they could be released beforehand if unfit, for misconduct, or if purchasing a discharge. If released for medical reasons but with good character, there were some forms of assistance. Institutional care in the two military hospitals provided for a few. However, most veterans were unskilled and, although fit men could still find labouring work, invalids were not likely to be employed. This almost certainly meant the workhouse.