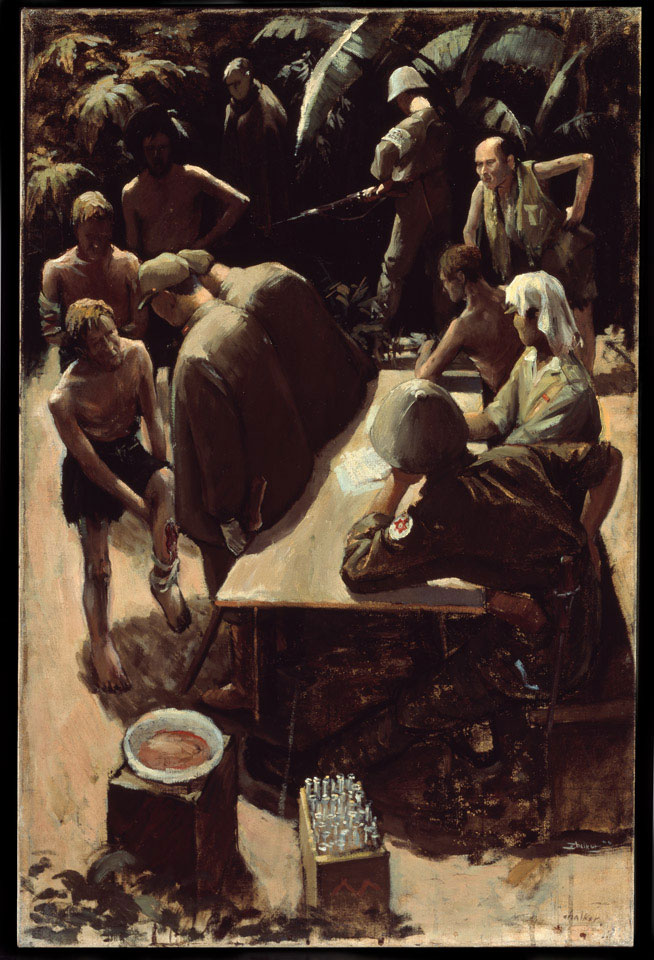 A Japanese medical inspection of prisoners of war during the Second World War; those fit enough to stand were sent back to work on the Thailand-Burma railway. Some 20,000 British, Australian and Dutch POWs and about 80,000 Chinese, Malays, Tamils, Thais and Burmese died while working on this project. Many more died in Japanese labour camps or in hospitals like Chungkai.

In March 1943, Jack Chalker was sent down river from the Kanyu River railway labour camp to Chungkai Base Hospital Camp with dysentery and dengue fever. Despite the lack of medical supplies, the ingenious inmates used every scrap of material to devise their own hospital equipment. Chalker used his drawing skills to help design such aids as crutches and even articulated false limbs. These were for patients whose severely ulcerated limbs needed amputation, an operation carried out by fellow prisoners, including the renowned Australian surgeon, Edward 'Weary' Dunlop.

Whilst a prisoner of war, Chalker kept a diary and made a number of sketches which he hid in hollow bamboo sticks buried in the ground. In June 1944, when he was about to be transferred to Nakhon Pathom, he dug up those drawings which had survived insect damage and concealed them in a false section of his haversack.

Two years later in 1946, while a student at the Royal College of Art, Jack Chalker painted this picture from one of these drawings. The artist's memoirs and drawings of his wartime experiences were published in 'Burma Railway Artist, The War Drawings of Jack Chalker', London (1994).