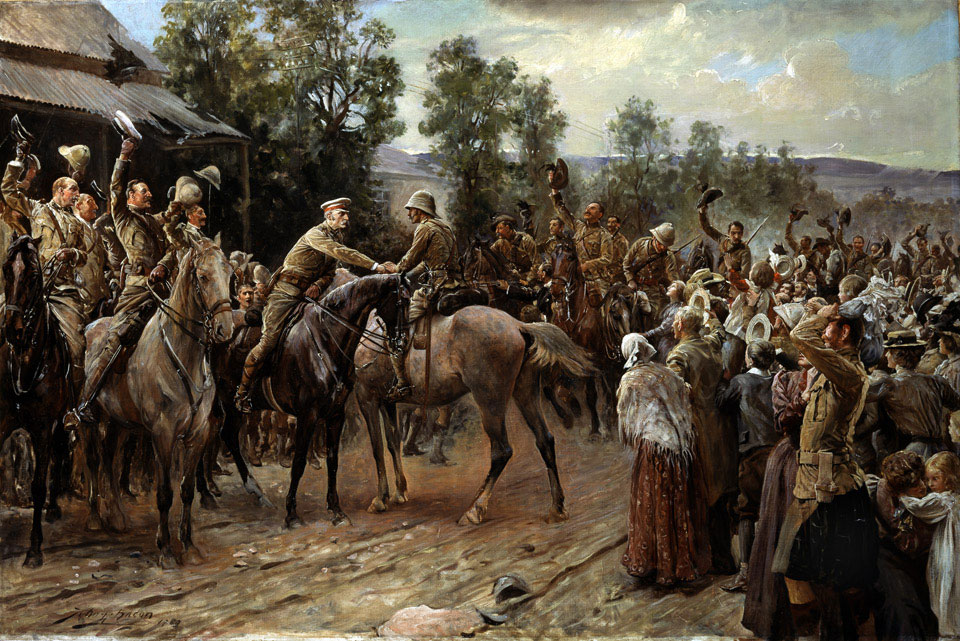 The Siege of Ladysmith was one of the most famous incidents of the Boer War (1899-1902). Following initial successes against the invading Boers at Talana and Elandslaagte (20 and 21 October 1899), Lieutenant-General (later Field Marshal) Sir George White (1835-1912) commanding the Natal Field Force, was driven back. White concentrated his forces at the strategic town of Ladysmith where he was besieged by Boers. Some 13,500 troops, the vast majority British regulars, were confined with 7,500 civilians within a 22.5 km perimeter.

General Sir Redvers Buller (1838-1908) and his troops finally relieved the town on 28 February. In this painting, which may not depict an actual event, Lieutenant-General Sir George White shakes hands with Colonel (later Lieutenant-General) Lord Douglas Hamilton, 12th Earl Dundonald (1852-1935), representing Buller's relieving force at nearby Pieter's Hill on the outskirts of Ladysmith.

Known as the 'Bovril War Picture', the photogravure of this picture was sponsored and offered free to those who collected 21 shillings-worth of special coupons which accompanied bottles of the product sold in 1901.