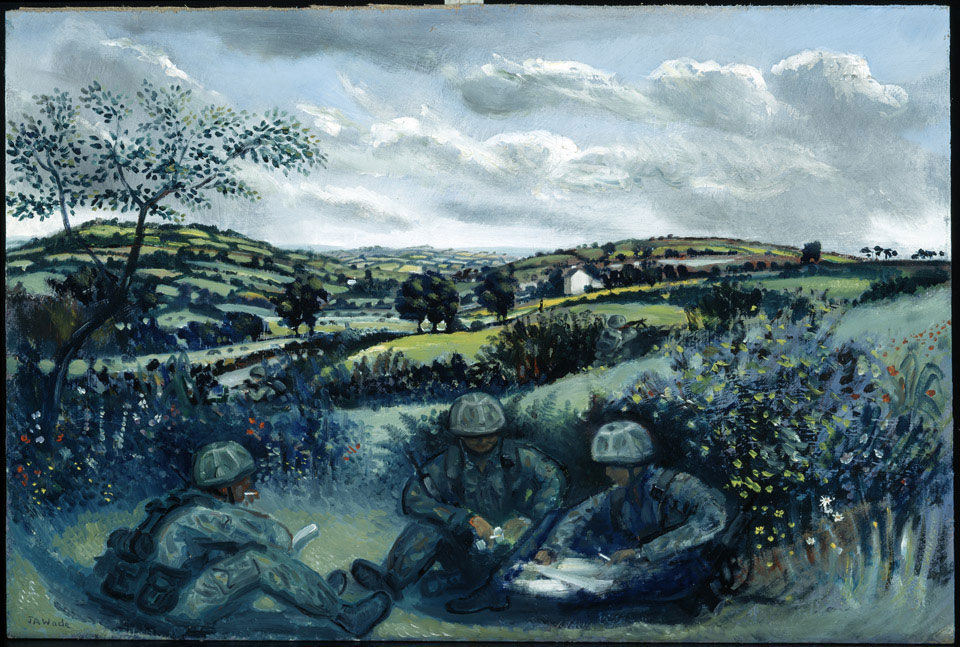 'Welcome to the Irish Republic, Sir!' A British infantry patrol lost on the border with Northern Ireland, 1988

This patrol has stopped to consult the map and get its bearings, while two men are posted as sentries on the look out. The painting's title was a phrase actually uttered by a sergeant to his officer, in a spirit of grim humour. It refers to their realisation, by consulting the map, that they have accidentally crossed the border into the Republic of Ireland.

In the countryside away from marked roads, such accidental trespassing by British soldiers has inevitably occurred from time-to-time. It is deemed a serious matter, which is notifiable to the military authorities. The picture was based on the artist's own experience as an officer in the Royal Highland Fusiliers (Princess Margaret's Own Glasgow and Ayrshire Regiment). In 1971, the regiment suffered its most serious incident in the Province when three off-duty fusiliers, one of whom was only 17 years old, were talked into going to a party on the outskirts of Belfast. Instead, they were ambushed and then executed by a group of men from the IRA, an atrocity which caused the minimum age for soldiers serving in Northern Ireland to be raised to 18.

The regiment was formed in 1959 from an amalgamation of the Royal Scots Fusiliers and the Highland Light Infantry (City of Glasgow Regiment), and its men were drawn mainly from Ayrshire and Glasgow.