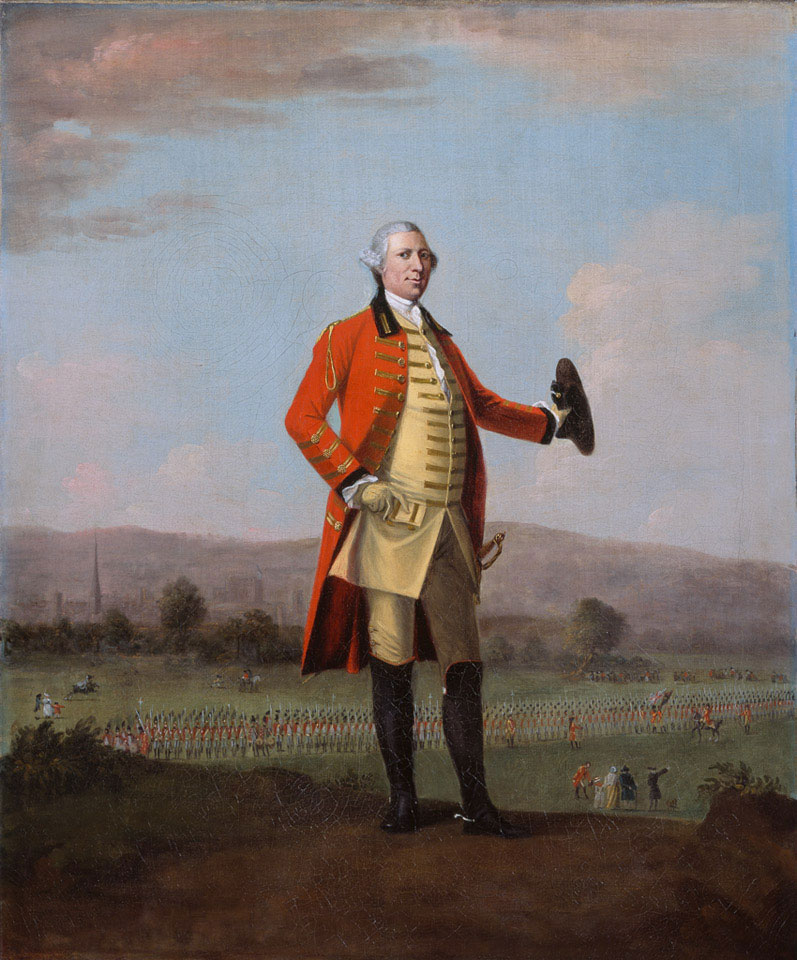 Sir Armine Wodehouse, MP, Colonel of the 2nd, or Eastern Regiment of Norfolk Militia, at a Review of his Regiment near Norwich, 1759 (c)

The MP for Norfolk, Wodehouse (1714-1777) held no regular commission in the Army but was in fact a politician from the leading local Tory family. As a politician and colonel of militia, he effectively 'shared' the County of Norfolk in friendly partnership with George Townshend MP (later 4th Viscount Townshend), Colonel of the 1st, or Western Regiment of Norfolk Militia.

Wodehouse's neighbours, George Walpole, 3rd Earl of Orford (Lord Lieutenant of Norfolk) and Townshend were the moving forces behind the controversial Militia Bill. The establishment of the militia as a county-based military force soon after the outbreak of the Seven Years' War (1756-1763) owed much to the dissatisfaction of English country gentry with the Hanoverian dynasty. They particularly resented the recent use of German mercenaries to defend England against a threatened French invasion. So it is with immense pride and not a little political triumphalism that Sir Armine gestures to his own regiment, drawn up on the outskirts of Norwich, with the castle and cathedral visible in the far distance. On the left of Sir Armine are the tall caps of the grenadier company which always paraded on the right flank.

Swiss by birth, the artist, David Morier, came to England in 1743 and was appointed 'Limner' to the Duke of Cumberland, Commander-in-Chief of the Army, with an annual salary of £100. Morier is principally known for small military portraits and for the series of paintings illustrating the 1751 Royal Warrant, the first official dress regulations (Royal Collection).