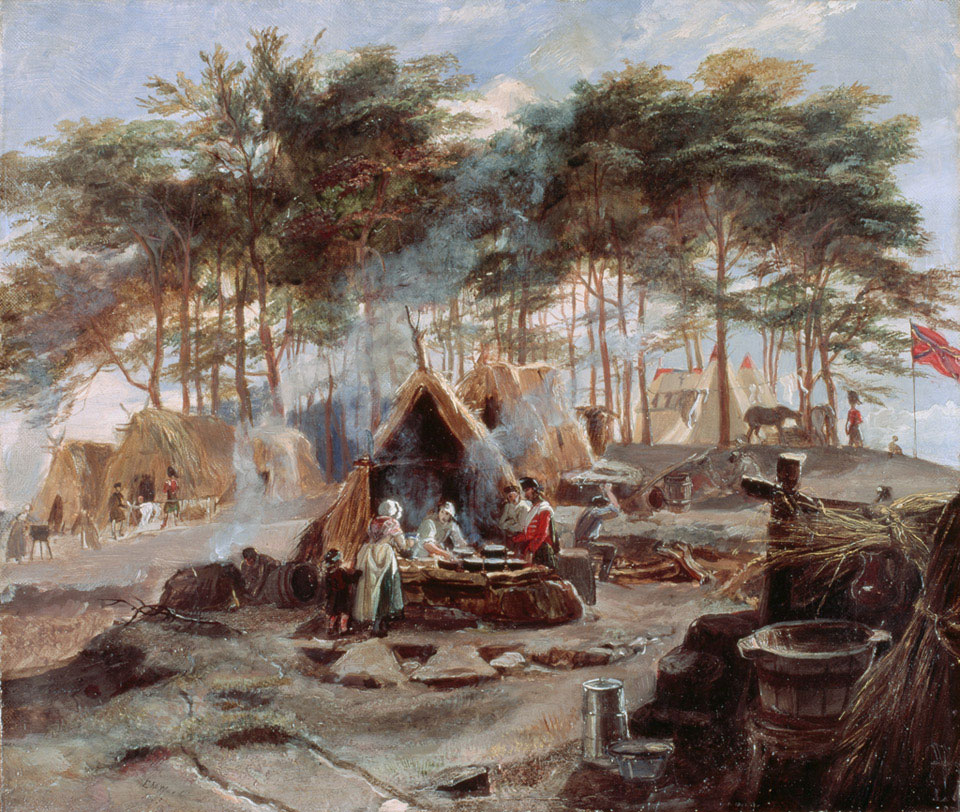 In 1853 Chobham Camp was the scene of the first large-scale manoeuvres in Britain since the Napoleonic Wars. Unease at Russia's ambitions in the Balkans and eastern Mediterranean prompted an increase in British military activity. These preparations proved invaluable in the Crimean War (1854-1856).

From 14 June to 25 August 8,000 men, 1,500 horses and 24 guns mustered on the heathland in Surrey for drill, field operations and parades, under the command of Lieutenant-General Sir (later Field Marshal) John Colbourne, 1st Baron Seaton (1778-1863). It attracted large crowds of spectators, including royalty and foreign dignitaries, and was recorded in numerous paintings and prints. 'The Illustrated London News' published a diary of each day's events, commenting on 4 June that;

'Chobham Common ... has already become an object of exciting interest both in this country and on the Continent. The length of time that has elapsed, now nearly sixty years, since a similar military display took place in England, together with the threatening aspect of affairs abroad, seem to give increased significance to the movement, which the timid and assured alike regard as a most important "note of preparation".

Beyond the invaluable training for the ensuing war in the Crimea which this major exercise provided the Army, it also tested the logistics of maintaining a large force in the field. Certain extra skills were also acquired by soldiers adapting to living under canvas for a period. According to 'The Illustrated London News', 'some very awkward attempts at cookery characterised the earlier stages of the bivouac; but, after a little drilling, the men became more expert in handling the camp kettle'.

In an encampment of a battalion of infantry - in this instance a Highland Regiment - regulations stated that the camp kitchens were to be built in front of the Rear Guard, with the sutlers in front of them in turn. The Army relied on the presence of private entrepreneurs or sutlers to sell provisions to the troops, licensing and accommodating them within the encampment.

Although the 42nd (The Royal Highland), the 79th (Cameron Highlanders) and the 93rd (Highlanders) Regiments of Foot were not brigaded together at Chobham, they nevertheless camped in the same area on the heath. Queen Victoria had expressed herself particularly satisfied with the conduct and appearance of the Highland soldiers and her enthusiasm for all things Scottish made their camp a particular attraction for visitors.