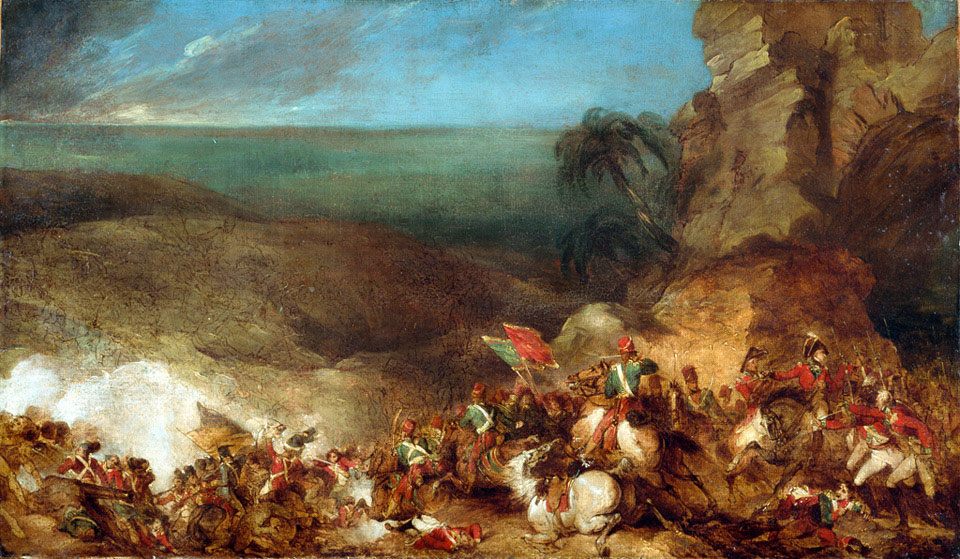 A study for the right hand section of 'The Great Historical Picture of the Battle of Alexandria'.

This dramatic and vigorous oil sketch is thought to have been a study for the right hand portion of Robert Ker Porter's lost panorama of the Battle of Alexandria, which is said to have measured an impressive 22 x 135 ft. The battle took place at night on the narrow spit of land between Lake Aboukir and the Mediterranean Sea. The French forces under General Jacques-François Menou were defeated by the British Expeditionary corps under General Sir Ralph Abercromby, though the British General was mortally wounded.

Many of the officers present at the battle corresponded with Porter, providing him with details of the actions of both armies, their uniform and equipment. The painting included more than 90 portraits and, from the printed key, it is possible to identify some of them in this oils sketch. The mounted figure to the right of the colours is Major-General John Moore, who was later promoted Lieutenant General and knighted, before being mortally wounded at the Battle of Corunna (1809). At the Battle of Alexandria Moore commanded the reserve division, which faced the brunt of the French attack amongst the ruins of Nicopolis.

The panorama was first exhibited on 3 May 1802 at the Lyceum in the Strand, London. In 1803 it was exhibited in Dublin but, in January 1804, on its way back to England, the sloop carrying the picture was wrecked off the mouth of the Mersey. The last record of the panorama's existence was in 'The Times' 'which reported the incident, stating that the painting was salvaged but 'much damaged'.