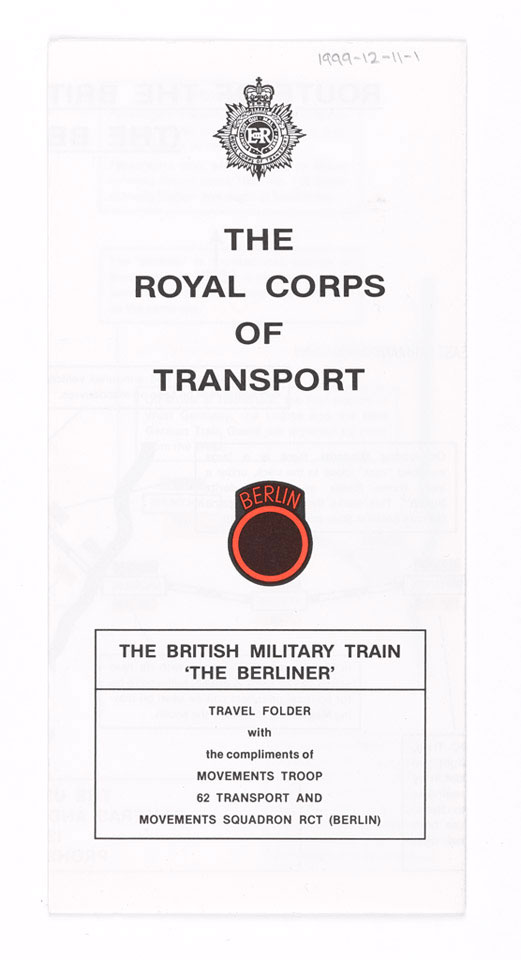 Information Leaflet from the British Military Train, 'The Berliner', 1991 (c)

Since 1945, the Berliner train from Charlottenburg to Braunschweig had run every day apart from Christmas Day, and during the short interlude of the Berlin Blockade. Beginning in Berlin, the journey took about four hours to complete before returning in the afternoon. The operation and administration of the Berliner had been the responsibility of 62 Transport and Movement Squadron, Royal Corps of Transport, but the train guard staff were drawn from the Berlin garrison, giving many soldiers the opportunity to travel both as passengers and in a working capacity on the train.

The soldiers acting as guards were under strict instructions not to communicate with the Soviets - but they frequently did. Any journey began with the issuing of the BTD, the Berlin Travel Document, which needed to be completed in triplicate with utter accuracy. As Colonel Richard Spencer, who served in Berlin with the Army Legal Corps between 1983 and 1986, recalled, this needed to be done, 'because, we were told, the Soviet Red Army comparing your form with your ID card was an illiterate peasant who is just going to look at them, not read them, so therefore it had to be perfect'. This was handed to the train duty officer. The ritual of the engine being checked at Potsdam, the BTDs and identity documents for the passengers being checked at Marienborn as soldiers of opposing sides met on the platform, of the engine being changed at Helmstedt for the run up or down the corridor, and of passing through East Germany were unique aspects of the Cold War. The train journey of course had been another opportunity to wage the ideological Cold War - it was not a coincidence that when the train stopped at Potsdam Hauptbahnhof in the rush hour, dinner was being served in the dining car, in full view of the East German citizens just across the tracks. Spencer recalls watching them, 'beavering around, trying not to catch your eye. There was the Iron Curtain, just the other side of the track. And one would either be finishing off the bottle of excellent Rhine wine, or enjoying a glass of port.' The opportunity to showcase the higher standard of living in the West was never missed.

The Berlin Brigade HQ was disbanded on 1st January 1991. On 7 February 1991, the Berliner ran for the last time. It was an icon of the Cold War, but with the conflict over, Germany reunified, and greater air and car travel, it passed into history.