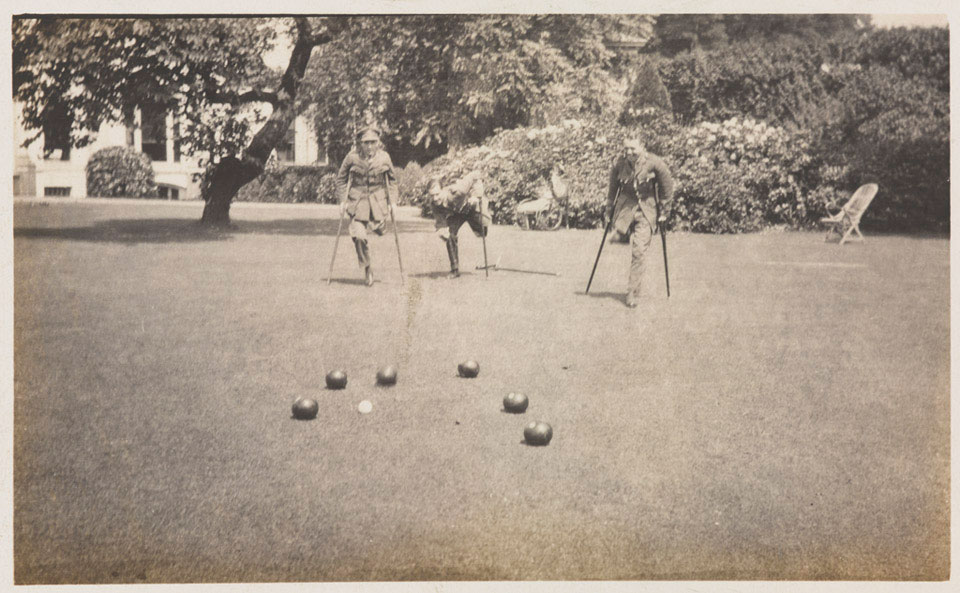 Amputees playing bowls during convalescence in the gardens of Dover House Hospital, 1918

Cyril Edwards (1893-1978) a member of the 2/7th Battalion The Prince of Wales's Own (West Yorkshire Regiment) was wounded in action in July 1917 when he stood on a hand grenade to save the life of a non-commissioned officer. Edward's foot was blown off, but he became the first officer to receive and survive a blood transfusion at a front line hospital. He was awarded the Distinguished Service Order (DSO) for his bravery. Edwards was sent to Dover House to convalesce in 1918.

John Pierpoint Morgan Junior, an American banker, provided Dover House, in south west London, for use as a hospital for limbless officers in 1915. Close to Roehampton House, which also housed disabled servicemen, Dover House stood in substantial grounds. Both establishments were affiliated to the King George Hospital in London. In 1916 an appeal was launched to raise money to enable an artificial limb-fitting service to be offered by the two hospitals. After the closure of Dover House in 1919, Roehampton House continued to offer the service. Dover House was demolished in 1921 to make way for a housing estate.