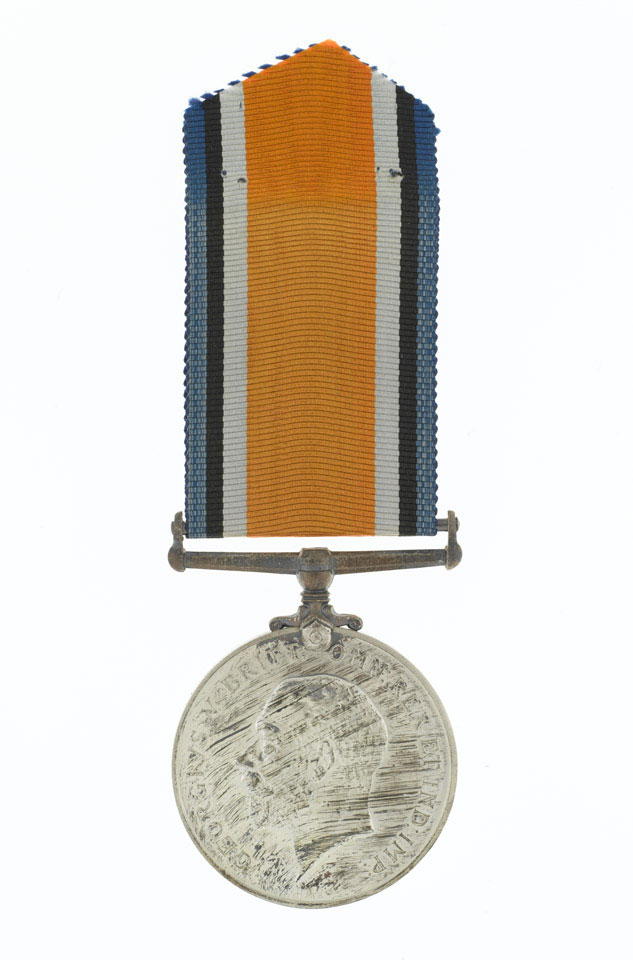 Silver campaign medal with a portrait of King George V facing left with the inscription, 'Georgivs V Britt: Omn: Rex Et Ind Imp:', on the obverse and an equestrian figure of St George, trampling a shield bearing the Prussian eagle, on the reverse. Additional designs on the reverse include the years, '1914' and '1918', a skull and crossed bones representing death and a rising sun, representing victory. Orange corded silk ribbon edged with blue and white vertical stripes.

William Richard Cotter (1882-1916) was born in Folkestone, Kent, the eldest of six sons of Richard and Amy Cotter of number 2, Barton Cottages, Sandgate. His father was Irish and worked as a plasterer's labourer. Cotter joined 1st Battalion The Buffs (East Kent Regiment) in 1902 and went on to serve in India, Aden, England and Ireland before being discharged to the Reserve in February 1914.

Following the outbreak of war in August of that year he returned to the colours. This was despite having earlier lost the sight in his right eye after being glassed during a brawl in a Dover public house. His five younger brothers also joined the Army or Royal Navy. Cotter's previous Army experience soon saw him promoted to Acting Corporal and during his service on the Western Front he was unsuccessfully recommended for the Distinguished Conduct Medal (DCM).

In March 1916 Cotter was serving with the 6th (Service) Battalion of The Buffs, part of 37th Brigade, 12th Eastern Division, when he was posthumously awarded the Victoria Cross (VC) for bravery in action on 6-7 March. His unit was attempting to take a position known as 'Triangle Crater' near the Hohenzollern Redoubt at Loos. According to the 'London Gazette' of 28 March 1916:

'For most conspicuous bravery and devotion to duty. When his right leg had been blown off at the knee and he had also been wounded in both arms, he made his way unaided for fifty yards to a crater, steadied the men who were holding it, controlled their fire, issued orders, and altered the dispositions of his men to meet a fresh counter-attack by the enemy. For two hours he held his position, and only allowed his wounds to be roughly dressed when the attack had quieted down. He could not be moved back for fourteen hours, and during all this time had a cheery word for all who passed him. There is no doubt that his magnificent courage helped greatly to save a critical situation'.

Cotter lived long enough to know that he had been successfully recommended for the VC. The VC ribbon was pinned to his chest by Lieutenant-General Sir Hubert Gough, commander of I Corps, while he lay in hospital at Lillers. His wounds were so severe however that he eventually succumbed on 14 March 1916, aged 33. He was buried at Lillers Communal Cemetery near Bethune.