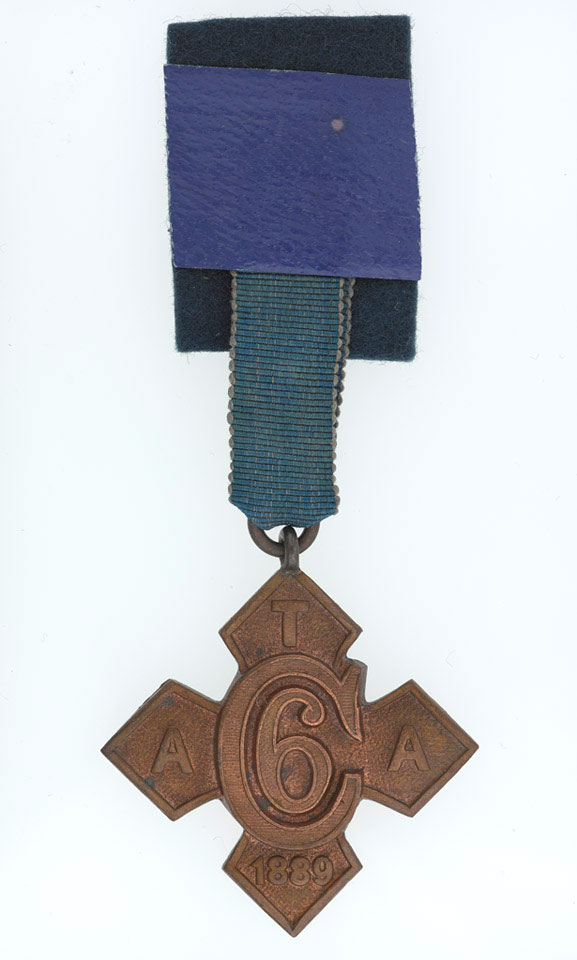 Copper cross urdee with an initial 'C' enclosing the numeral '6', to denote a serviceman's six month's of abstention from alcohol. The arms of the cross bear the initials 'A', 'T', and 'A', for Army Temperance Association and the year '1889'. The medal has a suspension ring and a loop for suspension from a narrow dark blue ribbon.

One of the rewards the Association provided to its members were medals that recognised their commitment to temperance. Some medals continued to be issued after organisational name changes were made as updated replacements were not always immediately available. This medal was awarded for six months of abstinence from alcohol.

This award is sometimes known as the 'Crookshank Badge' or 'Crookshank Cross', reflected in the inclusion of the letter 'C' in the design. The names were originally linked to the illustrator George Cruickshank who produced caricatures relating to the theme of temperance but they are now thought to refer to Colonel Arthur Chichester William Crookshank who was President of the Soldiers' Total Abstinence Association. He died of wounds received during the Black Mountain Expedition, on the the North West Frontier of India, on 24 October 1888.