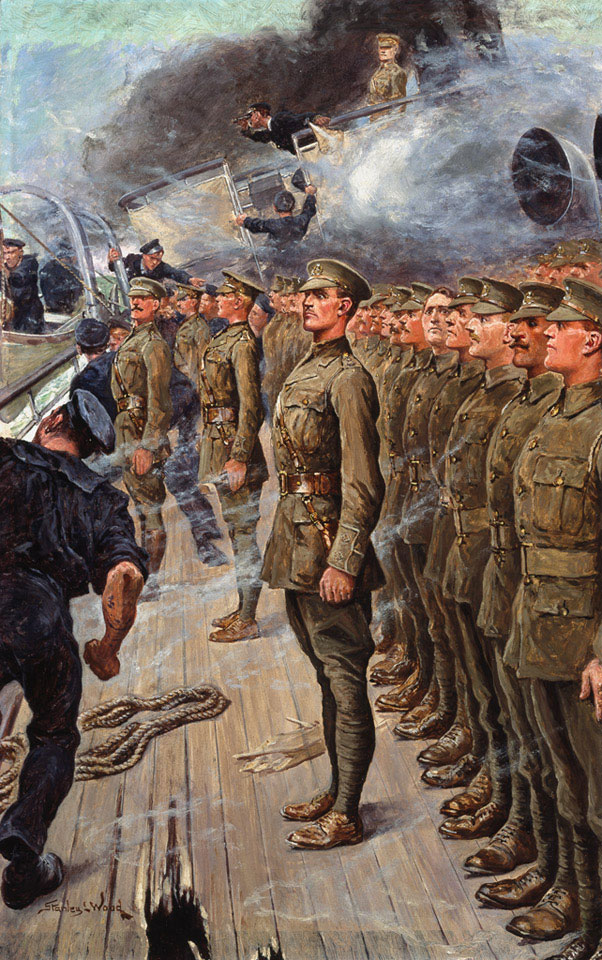 The evacuation of the troopship SS 'Tyndareus', which struck a mine off Cape Agulhas, South Africa, on 6 February 1917

During its passage from Devonport to Hong Kong during World War One, the troopship SS 'Tyndareus' was due to put in at Table Bay, South Africa, for fuel and fresh provisions. However, on 6 February 1917 while rounding Cape Agulhas, some 108 miles (173 km) south-east of Cape Town, the 11,000-ton troopship struck a mine laid by the German raider 'Wolf', with a terrific explosion. The ship rapidly began to fill with water and started going down by the head.

The painting illustrates the moments on deck when, instead of panicking, all the men of 25th (Garrison) Battalion Middlesex Regiment obeyed the command of the CO, Lieutenant-Colonel John Ward MP, to draw up on parade. This orderly response enabled boats to be lowered without mishap and, with other assistance, all those on board were saved.

King George V sent a message of approval which read: 'Please express to the officers commanding the Battalion of the Middlesex Regiment my admiration of the conduct displayed by all ranks on the occasion of the accident to the Tyndareus. In their discipline and courage they worthily upheld the splendid tradition of the Birkenhead, ever cherished in the annals of the British Army.'