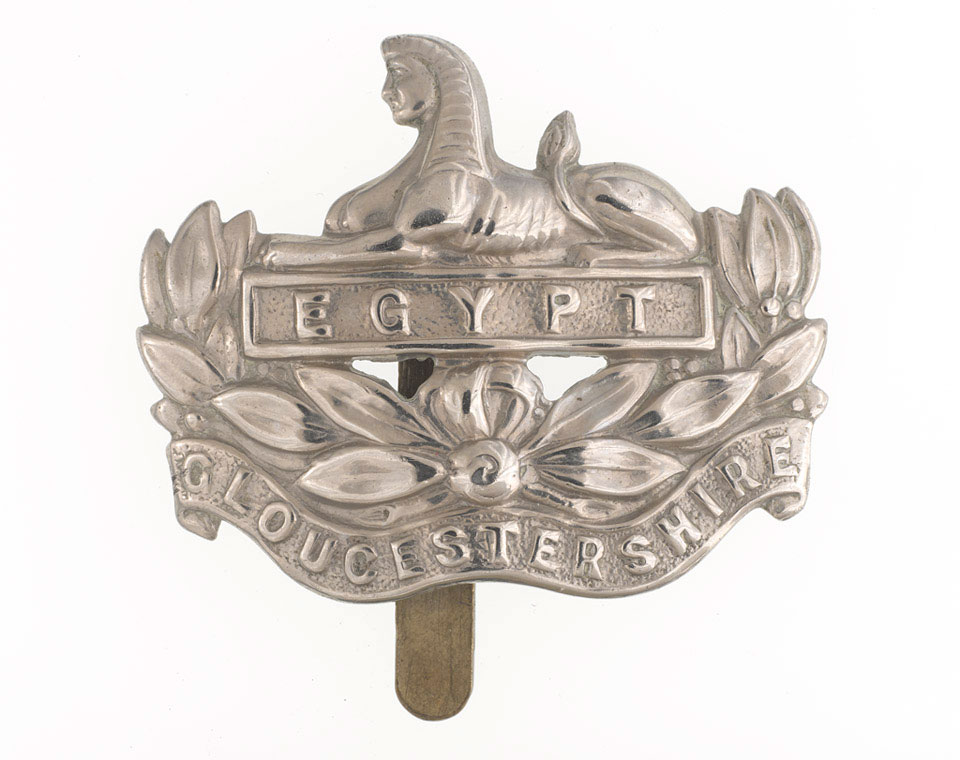 White metal badge with a Sphinx resting on a pedestal inscribed 'Egypt', within two sprigs of laurel. Below the laurel is a scroll inscribed 'Gloucestershire'.

The Sphinx insignia was awarded to the Gloucestershire's predecessor regiment, the 28th Foot, for their gallantry at Alexandria in Egypt in March 1801, during the Wars of the French Revolution in Egypt. The regiment was granted the unique distinction of wearing the Sphinx at the back of their headdress in commemoration of their back-to-back stand during the battle.

In August 1914, during the early stages of World War One (1914-1918), the 1st Battalion deployed straight to the Western Front, staying there until the end of the War. The 2nd Battalion had moved to Tientsin in China in 1913, so only arrived in France four months after the fighting had started. In November 1915, it transferred to Salonika, remaining there for the rest of the conflict.

The regiment also raised 21 Territorial, Reserve and New Army battalions during the War. These mainly served in Britain and on the Western Front. However, 1/4th and 1/5th Battalions served in Italy, and 7th Battalion was sent to Persia (now Iran) in July 1918, having also fought at Gallipoli in 1915.

After the War, 1st Battalion spent three years serving in Ireland during the Irish War of Independence (1919-1921). It then joined the Army of Occupation in Germany before moving to Egypt, Singapore, India and Burma. The 2nd Battalion spent the inter-war years in India and Egypt.

From the collection of the Buffs Regimental Museum.