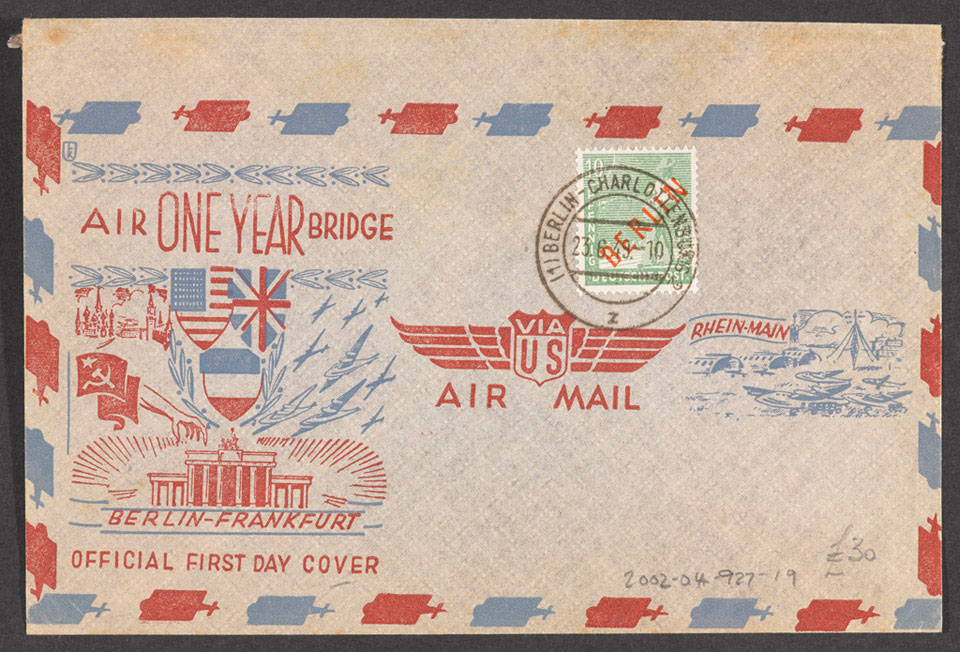 This US Air Mail commemorative envelope from 23 June 1949 was produced to mark the first anniversary of the Berlin blockade and the Allied efforts to relieve the Western Zones of the city.

In the aftermath of the Second World War, the alliances between the democratic western powers and the Soviet Union quickly broke down. On 24 June 1948, following increased tension and agitation, the Soviets exploited Berlin's location deep inside the Soviet Zone and blockaded the city.

The Western Allies responded, and on 26 June, the Berlin Airlift began, an Allied mission to supply the city by air. On 12 May 1949, the Soviets lifted the blockade of West Berlin and the phenomenal operation was drawn to a close the following month. During the 13 months from 26 June 1948 until 1 August 1949, more than 266,600 flights, carrying more than 2,223,000 tons of food, fuel and supplies, were made to Berlin by British and US aircraft. At its peak, one plane landed every 60 seconds at either Tempelhof, Gatow or Tegel. Even flying boats were used, which landed in the Havel See, and were then unloaded by barges. The Allies had estimated that 4,500 tons of supplies were required per day to keep the garrisons and civilians fed, clothed and heated. In the end they had managed to average a daily rate of 5,579 tons.

The design of the grasping Soviet hand makes it clear how far relations between the former allies had deteriorated, and the triumph of the Allied success. This particular envelope, and the letter it contained, were franked in the British sector of Berlin.