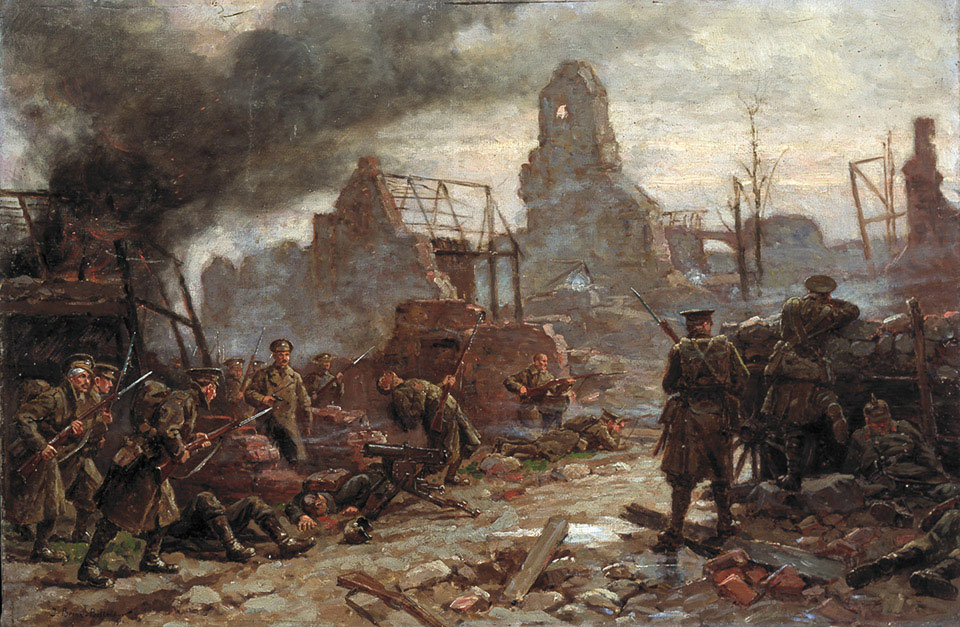 The taking of Neuve-Chapelle (Pas-de-Calais) by the British, 10 March 1915

The village of Neuve Chapelle lies north-east of Bethune on the road to Armentières, in the Pas de Calais département of northern France. In October 1914 it was the scene of the first major operation involving the Indian Corps, which successfully retook the village captured earlier by the Germans. Later, however, the Allies withdrew.

On 10 March 1915, following a preliminary bombardment by British artillery, a battle commenced to retake Neuve Chapelle. As happened elsewhere on the Western Front, the bombardment was largely ineffective, leaving intact much of the barbed-wire entanglement in front of the German positions. As a result, the Allies sustained very heavy casualties in the attack, particularly in The Duke of Cambridge's Own (Middlesex Regiment) and The Cameronians (Scottish Rifles) of the British IV Corps. The Meerut Division of the Indian Corps played a major role, and was successful despite German counter-attacks. At midnight on 12 March General Sir Douglas Haig (later Field Marshal 1st Earl Haig) halted the offensive to consolidate the areas just gained. The allies had sustained over 12,800 casualties. Today the Neuve Chapelle Indian Memorial just outside the village commemorates over 4,700 Indian soldiers killed in action.

The artist, Jean-Jacques Berne-Bellecour, studied with his father, Etienne, as well as Jean-Léon Gérôme and the military painter, Edouard Detaille. Berne-Bellecour began exhibiting military paintings from 1904 but, on the outbreak of the World War One, he was made a corporal in the 34eme Regiment d'Infanterie. He was soon sent on detachment as an official artist for the Musée de l'Armée, and also spent some time recording the British Army.