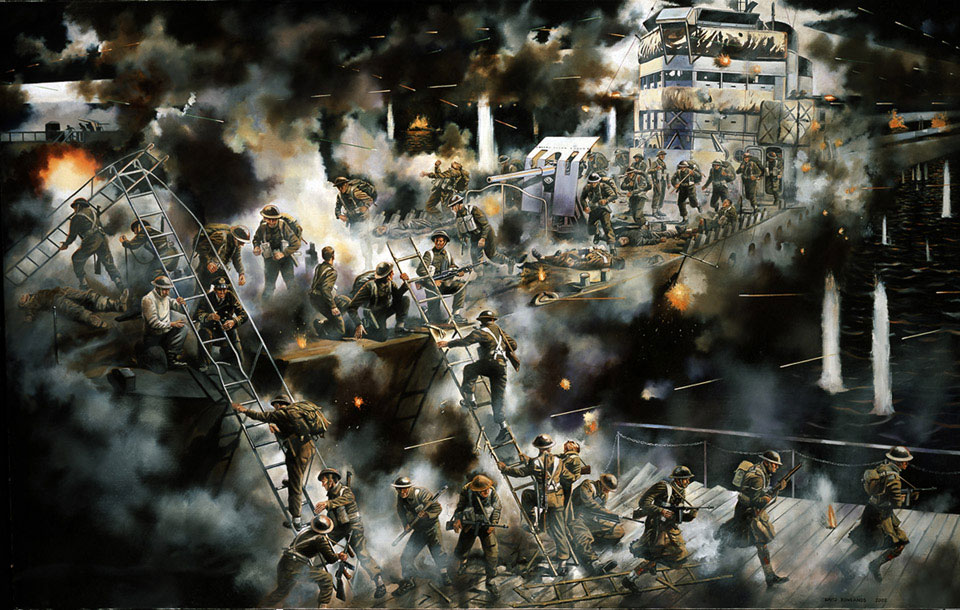 Codenamed 'Operation Chariot', this daring raid was launched at night against the heavily-defended French harbour of St Nazaire. This port had become a strategically-important target since it included the only dry dock on the Atlantic coastline large enough to accommodate the German battleship, 'Tirpitz'.

After the capitulation of France in June 1940, Germany took control of the country's Atlantic coastline. Britain depended on its sea routes for supplies, but these were seriously threatened by U-boats and surface raiders. When 'Tirpitz' became operational in January 1942, plans were drawn up to attack St Nazaire since, without a haven for repair, it was unlikely that the new battleship would risk sailing in Atlantic waters.

A Combined Operations force of Army Commandos and Royal Navy personnel was selected to carry out the extremely hazardous mission on the well-defended dock five miles up the River Loire. The obsolete destroyer HMS 'Campbeltown', packed with high explosives and leading a flotilla of motor launches carrying Commandos, rammed the gates or caisson of the Normandie dock at high speed. The painting shows a moment later with the assault parties and demolition teams climbing down onto the caisson in the face of determined German resistance.

British casualties were 169 killed in action out of 611 men on the raid: less than half of the force returned home. At 10.35 am the 'Campbeltown' exploded, killing over 350 Germans on board, destroying the caisson and rendering the dry dock useless for the remainder of the war.

'Tirpitz' never ventured into the Atlantic to threaten British sea lanes and remained in Norwegian waters until she was sunk by the RAF in November 1944. Five Victoria Crosses were awarded for the gallant action that, to the Commandos of the Second World War (1939-1945), was 'the Greatest Raid of All'.

Donated by The St Nazaire Society