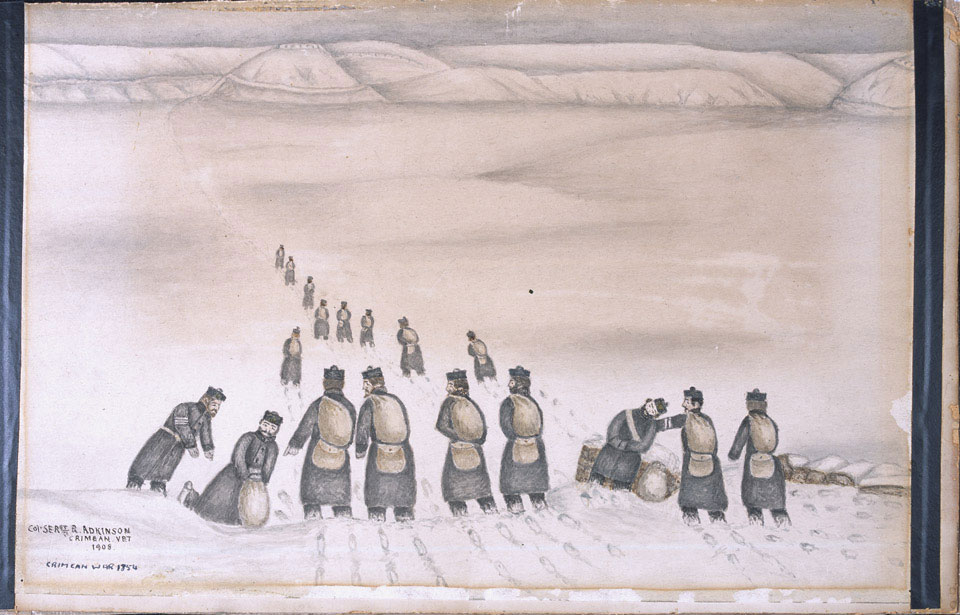 Richard Adkinson, born on 28 April 1835 in Kibworth, Leicestershire, enlisted in the 19th (1st Yorkshire North Riding) Regiment of Foot on 30 December 1852 and was promoted corporal in March 1854. In the Crimea, Adkinson was wounded at the Alma but returned to duty during the Siege of Sevastopol. He went on to serve in India from June 1857 until January 1872.

Although this watercolour of a party of the 19th Regiment of Foot trudging through thick snow from Balaklava to Sevastopol in the winter of 1854-1855 was not made on the spot, it depicts an identifiable location with the plateau of Sevastopol ahead and the route to the British encampment round the col to the left. In the worst of the winter, with wheeled transport unable to negotiate the unmade roads and most of the horses dead, soldiers were forced to complete the nineteen kilometre round journey to Balaklava themselves in order to collect their supplies.

Paintings by other ranks depicting the Crimean War (1854-1856) are rare as, unlike officers, they did not receive instruction in drawing and lacked ready access to materials.