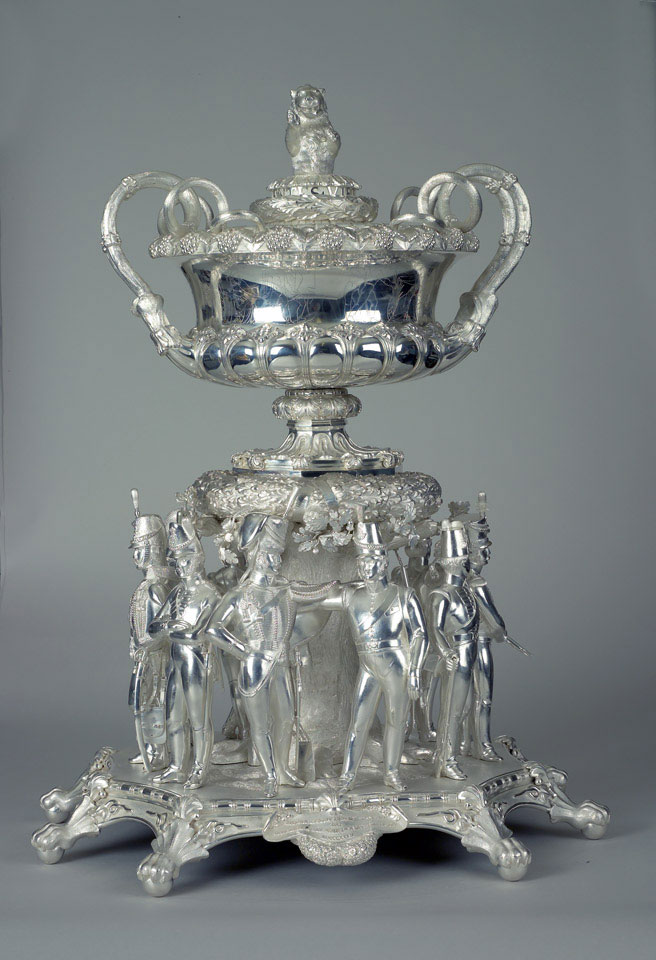 The Major North Ludlow Beamish Centrepiece presented by the Officers of the King's German Legion to their regimental historian, 1839

Silver, designed by J von Randel of Anspach, made by G Drewes and hallmarked Hanover, 1839.

The Centrepiece was commissioned by the Officers of the King's German Legion and presented to Major North Ludlow Beamish, author of the two-volume history of the legion (published 1832-1837). The accompanying testimonial spoke of his 'imperishable record of the services of those expatriated soldiers, who under the British standard, in distant fields, fought for the common freedom of Europe and their ignominiously enslaved country'.

In addition to the ten figures displaying different uniforms of the King's German Legion, the ornamentation of the centrepiece has symbolic meaning. The central oak tree is the German emblem of liberty, the ivy represents eternity, and the frieze around the cup tells the story in terms of classical symbols. Here, representing the invasion of Hanover, the female figure of Gallia (France), identified by the French cockerel, lays a possessive hand on the German oak tree. The weeping figure of the dispossessed Germania sits mourning while two German youths turn to leave, stepping onto a British ship. Next, they are received by Britannia who arms them in the service of the white horse of Hanover. Together with the British lion, they move to attack Gallia who cowers behind a shield bearing a Napoleonic eagle, the cockerel at her feet. The victorious men return home carrying laurel-crowned spears, to be welcomed by Germania, now restored to her royal throne. Major Beamish's family motto 'Virtus insignit audentes' [virtue marks the bold], and crest of the demi-lion rampant crown the trophy.

Purchased by the Society of Friends of the National Army Museum at a reduced price from Dr Ludlow W Beamish, the reduction being in memory of the vendor's parents, Ludlow Hamilton Beamish (1871-1951) and Mabel Anne (McNaughton) Beamish (1882-1964).