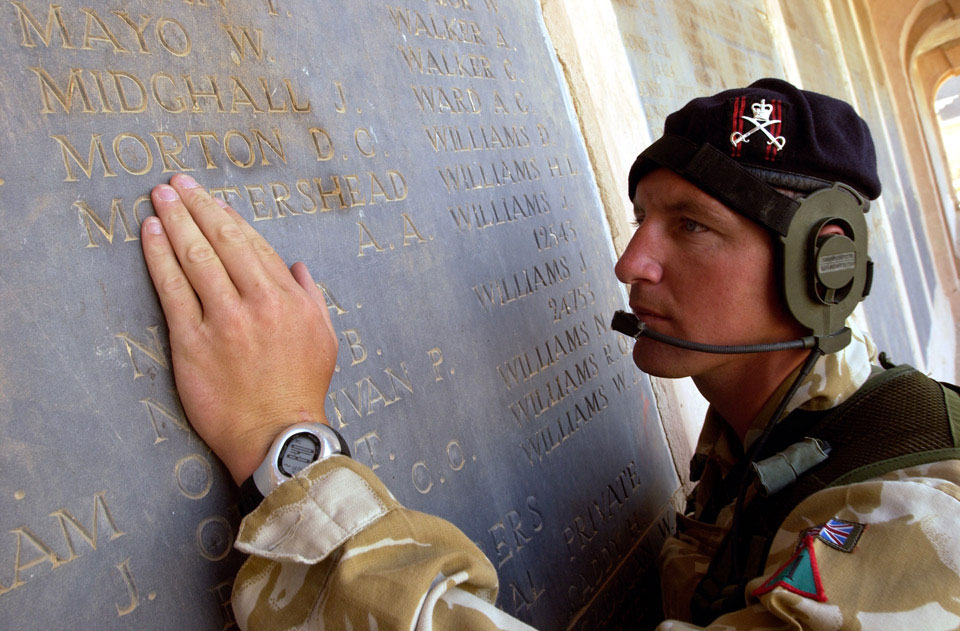 A sergeant of the Army Physical Training Corps, finds his namesake amongst the list of the fallen from the Mesopotamia campaign during World War One, July 2004

The Commonwealth War Graves Commission records Private David Charles Morton (53105), Royal Welsh Fusiliers, as being listed on the Basra War Memorial with his date of death as 29 April 1918. The memorial was originally located in Basra but was later moved by the Saddam Hussein regime.

Soldiers of 1st Battalion The Royal Welch Fusiliers, serving in Iraq on Operation TELIC, took part in a ceremony of remembrance for British Army soldiers killed whilst fighting in Mesopotamia during World War One (1914-1918). The soldiers, led by their Commanding Officer Lieutenant-Colonel Gerhard Wheeler and Battalion Chaplain Captain Mike Parker, paid tribute to the fallen in a dawn ceremony by the imposing memorial. After a minute silence the Regimental Sergeant Major WO1 (Warrant Officer First Class) Adrian Kent broke the silence with a reading from John 15:9-17, 'They shall grow not old as we that are left grow old. Age shall not weary them, nor the years condemn: At the going down of the sun and in the morning, we will remember them.'