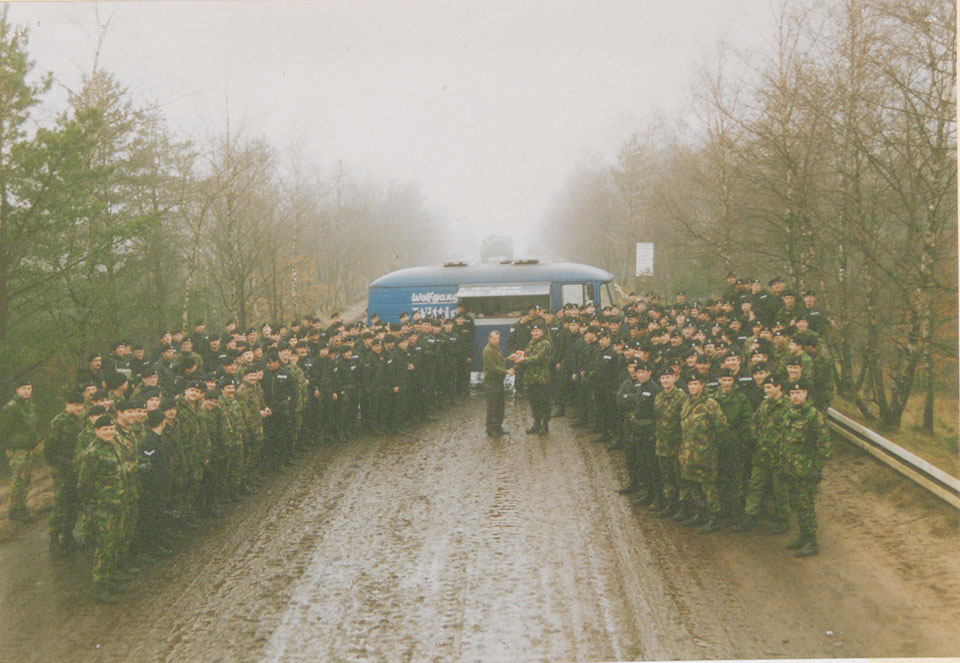 The British Soltau-Lüneburg Training Area in West Germany had been used by the British since the 1950s. Soltau was known for being cratered landscape, marked by ridges and rises created by the passage of hundreds of armoured vehicles over the decades. In winter it was covered by pools of icy mud, and in summer it was thick with sand clouds.

But a growing environmental movement had been protesting about the military use of the heath area since the mid-1980s, which the British had made increasing concessions to. In 1990, for example, a break in training of several weeks had been agreed during the time when the heath was in bloom during the peak tourist period between August and September. Increased urbanisation also meant that more and more people lived near the training area, and were having their lives disrupted. The political climate of the Options for Change defence review, combined with the effects of German reunification, meant that an agreement was reached in 1991 that all training would cease. The last training package there ran from 28th January to 11th February 1994, and the agreement between the British and German governments was not renewed when it ran out on 31st July 1994 and the area was formally handed back.

Soltau had been a major part of life for those who served in the British Army in Germany. It had been an area given over to battlegroup-size manoeuvre and while the main area was challenging to operate on, for those on recce vehicles the Lu?neburg extension allowed unparalleled opportunities for freedom of movement, observation work and map-reading skills. Places that had become synonymous with serving in Germany, such as Reinsehlen Camp, the Tank Bridge, the Jerry Can, the Pylon Line and not forgetting the Schwindebeck River - the final resting place of one or more armoured vehicles that could not be recovered from the banks - were gone forever.

The handing back of Soltau saw the end of an era for British forces in another way. Since 1974, British soldiers on the training area had enjoyed supplements to their rations when on exercise that had been provided by Wolfgang Meier and his fast food van. Meier had begun in 1974, taking over an existing food van business that had been run by a Brit and operated around the Bergen- Hohne area. He had heavily modified a blue Mercedes van to make it suitable for driving across country, meaning he could get into the hides and lager areas that the British troops were using, even during exercises. His ability to find troops who considered themselves concealed, and then get to them, was legendary - though on several occasions his van had to be towed out of difficulty by an armoured vehicle after bogging down. For 25 years his catering vans served bratwurst, fish and chips, chips with mayonnaise, and liquid refreshment to eager and grateful British troops, who flocked to the van wherever and whenever it appeared. With an uncanny ability to sniff out British troops despite all their attempts at camouflage - so much so that it was jokingly said that he was a KGB spy - and navigate challenging terrain, Wolfgang was and remains a fixture of the British Army's cultural memory in Germany.