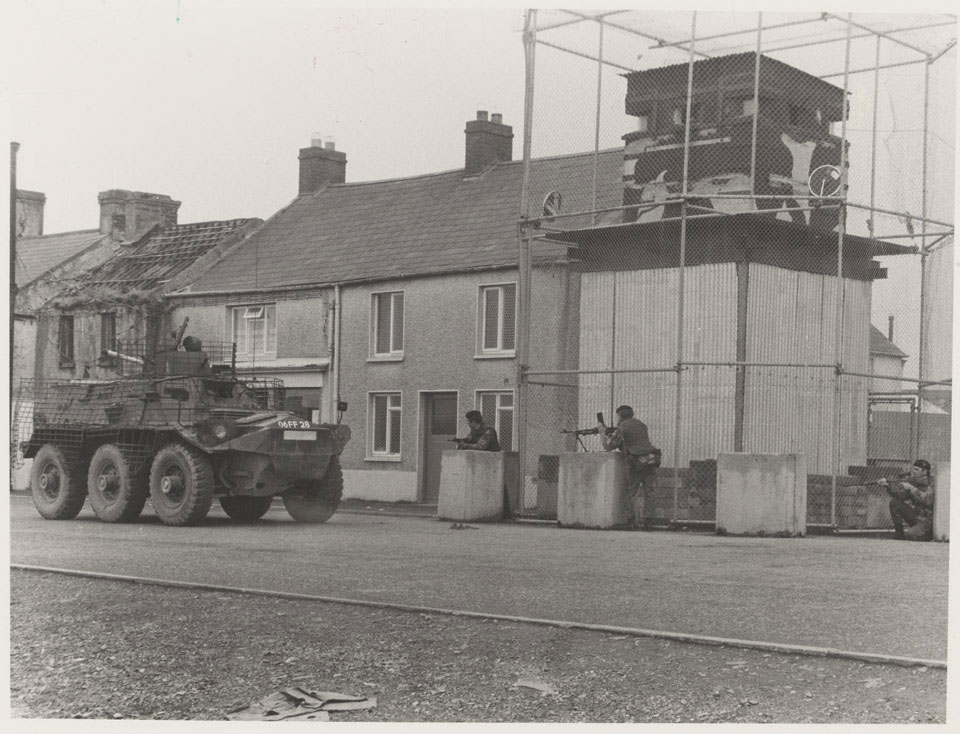 An outpost manned by members of the 1st Battalion, The Worcestershire and Sherwood Foresters Regiment, Crossmaglen, 1977

Divided by religion, politics and history, animosity between Protestants and Catholics exploded into civil unrest in 1969. This was followed swiftly by the deployment of British troops onto the streets of Belfast and Derry, who, with the local police force, cracked down hard on offenders and imposed a curfew. A counter-offensive was launched by community terrorist groups, notably the Provisional Irish Republican Army (PIRA). They attempted to make the province ungovernable, escalating their killing, particularly with car bombs. Both Catholic and Protestant 'paramilitary' organisations attacked British troops, as well as murdering civilians of the opposite community.

From 1971 strong countermeasures were introduced. Suspected terrorists could now be interned without trial. British troops began to dominate Catholic areas, setting up checkpoints. However, following 'Bloody Sunday' in 1972, when 13 civilians were shot dead by British paratroopers at a civil rights demonstration, attacks on troops became more intense. Throughout the province road blocks, checkpoints and watch towers were erected in an attempt to crack down on paramilitary violence.

One of 28 photographs of the 1st Worcestershire and Sherwood Foresters Regiment, Northern Ireland, 1977. From a collection of photographs assembled for use in Col Robin McNish's 'Iron Division - The History of the 3rd Division', 1918-1977.