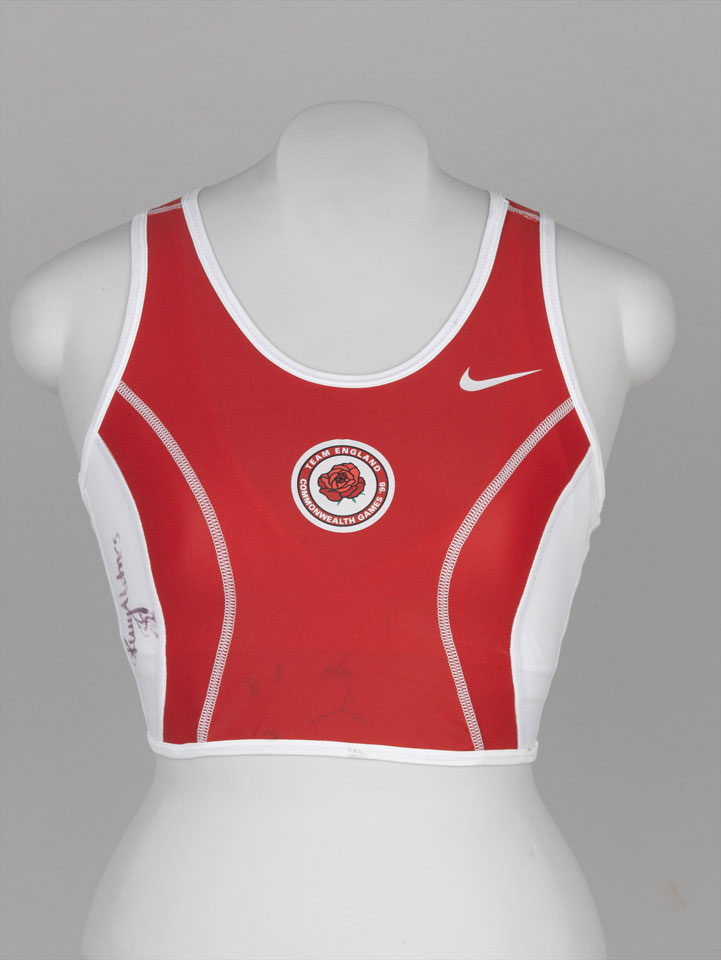 Physical training shirt worn by Kelly Holmes when a member of the England Commonwealth Games Team, 1998

Dame Kelly Holmes, DBE, MBE, was born on 9 April 1970 in Pembury, Kent, the daughter of a Jamaican-born father and an English mother. On leaving school, where she had been a keen athlete, Holmes joined the Army. She initially served as a lorry driver in the Women's Royal Army Corps, and when that corps was disbanded in 1992 she transferred to the Adjutant General's Corps as a physical trainer, reaching the rank of sergeant. She also worked as a recruitment officer in London. Holmes also became British Army judo champion. During Army athletics events Holmes once competed in the men's 800 metres at a meeting, as it was considered that for her to run in the women's event would be too embarrassing for the other competitors. For several years she combined both athletics and an Army career until increased funding allowed her to become a full-time athlete in 1997.

During a glittering career she won a host of medals in both the 800 and 1500 metres at the Commonwealth Games (1994, 1998, 2002), European Championships (1994, 2002), World Championships (1995, 2003) and Olympics Games (2000). Her greatest achievement was an incredible double of the 800 and 1500 metres gold at the 2004 Athens Olympics. Later that year she was voted BBC Sports Personality of the Year. Holmes was made a Dame Commander of the Order of the British Empire in the New Year's Honours List of 2005. She had previously been appointed Member of the Order of the British Empire in the Military Division in 1998 for services to the British Army. She retired from athletics in December 2005.