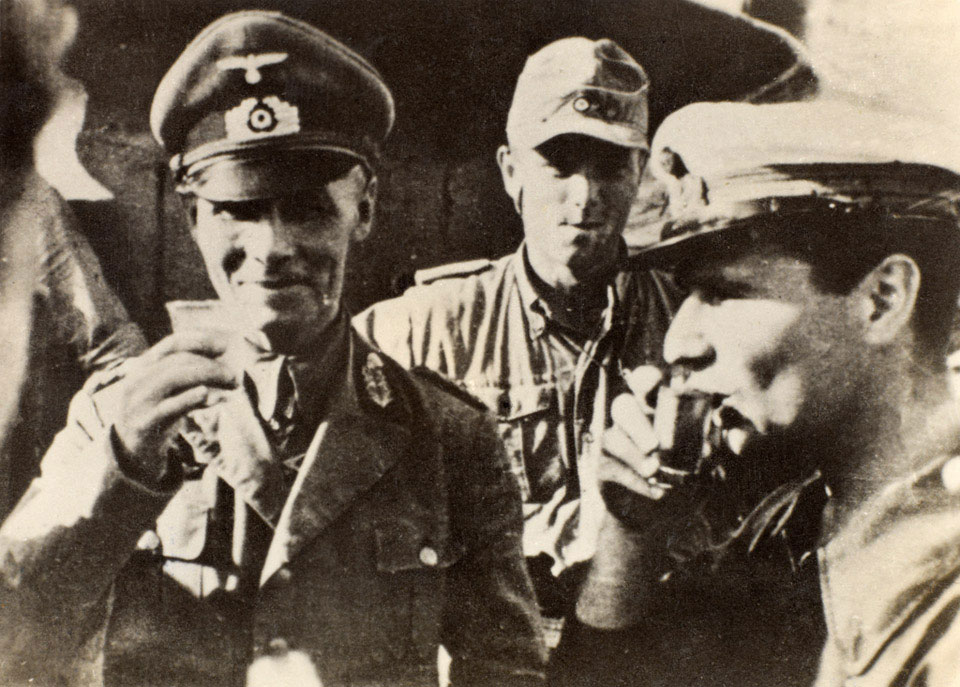 Erwin Rommel was Britain's most persistent opponent in the Second World War. He achieved international fame and legendary status for his daring and brilliant generalship during the battle for North Africa.

The son of a schoolmaster, Rommel was born in Heidenheim, Württenmberg in 1891. He joined the army in 1910 and during the First World War served with distinction on the Western, Rumanian and Italian Fronts, winning the 'Pour le Mérite' (Prussia's highest award for valour) for an intrepid mountain assault which resulted in the capture of an entire enemy division.

Continuing his career in the interwar years, Rommel distilled his knowledge and experience into a book entitled 'Infantry Attacks' (1937), which along with literary fame brought him to the attention of Hitler. Through Hitler's patronage, in 1940 Rommel secured the prestige command of one of the new panzer (tank) divisions for the forthcoming invasion of France. Rommel was in his element in this new role and proved a superb exponent of the new style of warfare known as 'Blitzkrieg' (Lightning War). This bold and dynamic method of fighting aimed to utilise the power and mobility of armoured formations to shock and bewilder opponents, enabling both the rapid breakthrough of enemy lines and deep penetration of opposition territory.

In the summer of 1940 Blitzkrieg proved devastatingly effective and France collapsed in just six weeks. Rommel's division had been in the vanguard of the attack, conducting an advance of such rapidity that it earned the nickname of 'Ghost Division'.

Following this success, Rommel was given command of the newly formed 'Afrikakorps' and tasked with coming to the rescue of Germany's Italian allies who had been routed by the Allies in North Africa during 1940-41. Sensing an opportunity to inflict a crushing blow on the Allies and perhaps open a path to the Suez Canal, Rommel unleashed a series of audacious offensives, which both in 1941 and 1942 drove the Allies back into Egypt. Whilst his efforts in 1941 were partially frustrated by the dogged Allied defence of the port of Tobruk, in 1942 he crowned his greatest victory at Gazala by capturing this port and 30,000 Allied prisoners and, in so doing, won promotion to field marshal.

During this time Rommel proved to be a master of desert warfare and earned the nickname of the 'Desert Fox'. Exuding frenetic energy and leading from the front, Rommel inspired his troops to great feats of heroism and endurance. His instinct for handling armoured formations combined with the qualitative superiority of German units enabled the 'Afrikakorps' to consistently outmatch the Allies, often against heavy odds.

Yet whilst clearly a master tactician and superlative battlefield commander, Rommel failed to fully appreciate North Africa's lowly place in German grand strategy and the severe logistical constraints this placed upon his forces. German tactical dominance was thus counteracted by Allied logistical superiority. This gave rise to the see-saw warfare of the North African theatre, which saw the front move repeatedly back and forth over Libya and Egypt.

The decisive shift came towards the end of 1942 when a re-equipped Allied force under the command of Rommel's nemesis, General Bernard Law Montgomery, inflicted a serious defeat upon the Axis forces at El Alamein. This combined with the Anglo-American landings along the coast of Morocco and Algeria, rendered the Axis position in North Africa untenable. In spite of this, Rommel conducted a brilliant fighting retreat to Tunisia before being recalled to Germany. Rommel's skilful and chivalrous conduct of the campaign won him the admiration of his opponents, notably Churchill who praised him in the House of Commons.

Rommel's next important assignment was to prepare for the long-anticipated Allied invasion of Western Europe. To this end Rommel worked tirelessly to invigorate the construction of the coastal defence system known as the Atlantic Wall, a difficult task given the length of coastline and Germany's dwindling resources.

More troubling was the divided system of German military command, which prevented Rommel from implementing his plan of deploying Germany's armoured formations to defeat the Allied invasion on the beaches. As a result of this, when the Allies landed in Normandy in June 1944, the Germans were committed to fighting a battle of attrition which, given Allied superiority in men and material, they could not hope to win. During the battle Rommel was severely wounded when his staff car was strafed by an Allied aircraft.

By 1944 Rommel had become disillusioned with Hitler and became associated with a conspiracy against him. When in July 1944 an attempt on Hitler's life failed, Rommel fell foul of the ruthless purge that followed and in October 1944 was forced to commit suicide. Whilst not quite the stuff of myth that grew up around him in later years, Rommel was certainly one of the Second World War's greatest commanders.