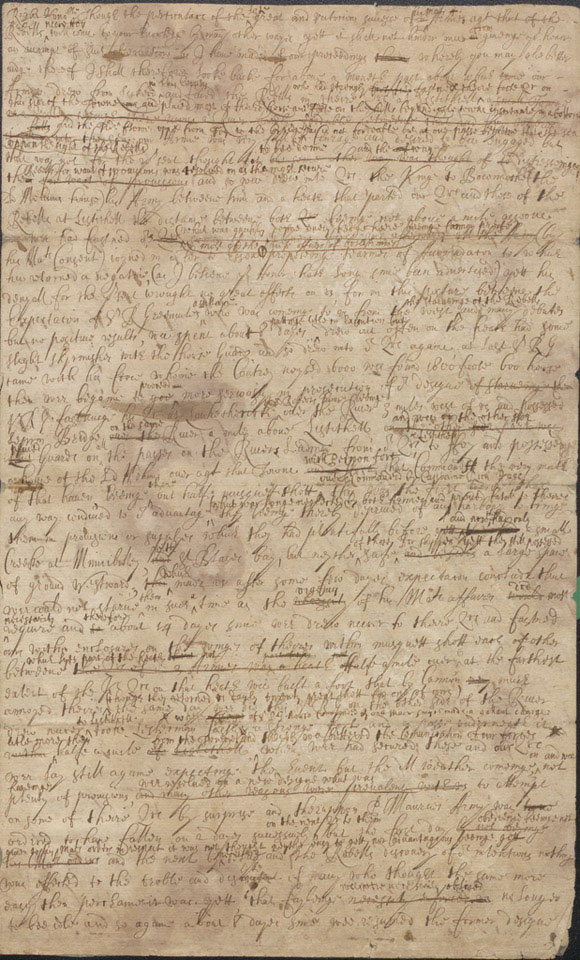 Draft letter by Sir Edward Walker, Secretary of War to King Charles I, to an unknown recipient identified only as Sir Nico (or Nicolas), 2 September 1644

This letter contains an account of the Battle of Lostwithiel which took place in August and September 1644 and was the greatest Royalist victory of the English Civil War (1642-1649).

In the summer of 1644 a Parliamentary army led by the Earl of Essex undertook an ill-fated campaign into the West Country. Essex aimed to relieve the besieged ports of Lyme and Plymouth and to wrest control of the county of Cornwall from the King. However, on entering Cornwall his plans began to unravel. His belief that the people of county would rally to him proved unfounded and, with the wind blowing in the wrong direction, he could not be supplied by sea.

These problems were compounded by the failure of Parliament's forces to work together and bring him effective aid. As a consequence, Royalist forces succeeded in trapping Essex's army in an area around Lostwithiel, where, after a series of battles, it was forced to surrender. Following on from their calamitous defeat at Marston Moor in July, this victory was a major boast to the Royalist cause although it was insufficient to turn the war in their favour.

This letter was written at Boconnoc House, which was the King's headquarters during the Battle, on 2 September, the day on which the Parliamentary army surrendered.