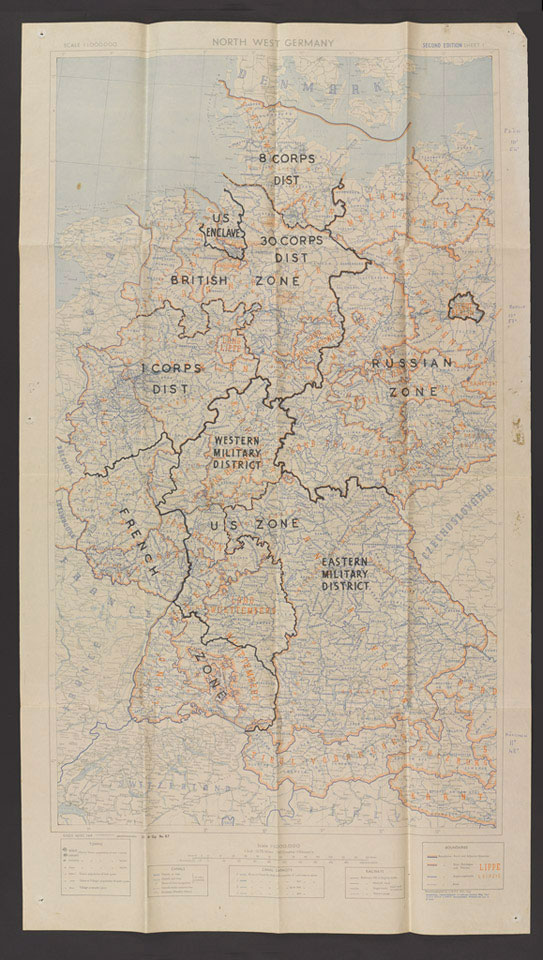 Map of Germany, 1942, customised to show the borders of the different zones of occupation in 1945

The Allies had decided at Yalta in February 1945, well before the end of the war, how a defeated Germany would be governed after their eventual victory in the Second World War. As with plans for Austria, Germany would be divided into four Zones of Occupation, with each of the victorious powers taking responsibility in their Zone.

This structure was established by the Berlin Declaration on 5 June 1945, which pronounced the end of the Third Reich and the replacement of all German civic and political authority by that of the Allies. They would be the sole political and legal authority in their Zones of the defeated Germany. The Potsdam Conference of 17 July to 2 August 1945 later formalised the goals of the four powers, that Germany should be demilitarised and de-Nazification should take place at all levels of society, and also confirmed the Zones of Occupation of Germany and Berlin. The four main powers would work together in the Berlin-based Allied Control Council, constituted on 30 August 1945, which would oversee matters relating to the country as a whole.

This map belonged to Marjorie Buy, who served with the Auxiliary Territorial Service in VIII Corps' district of Germany in 1945.