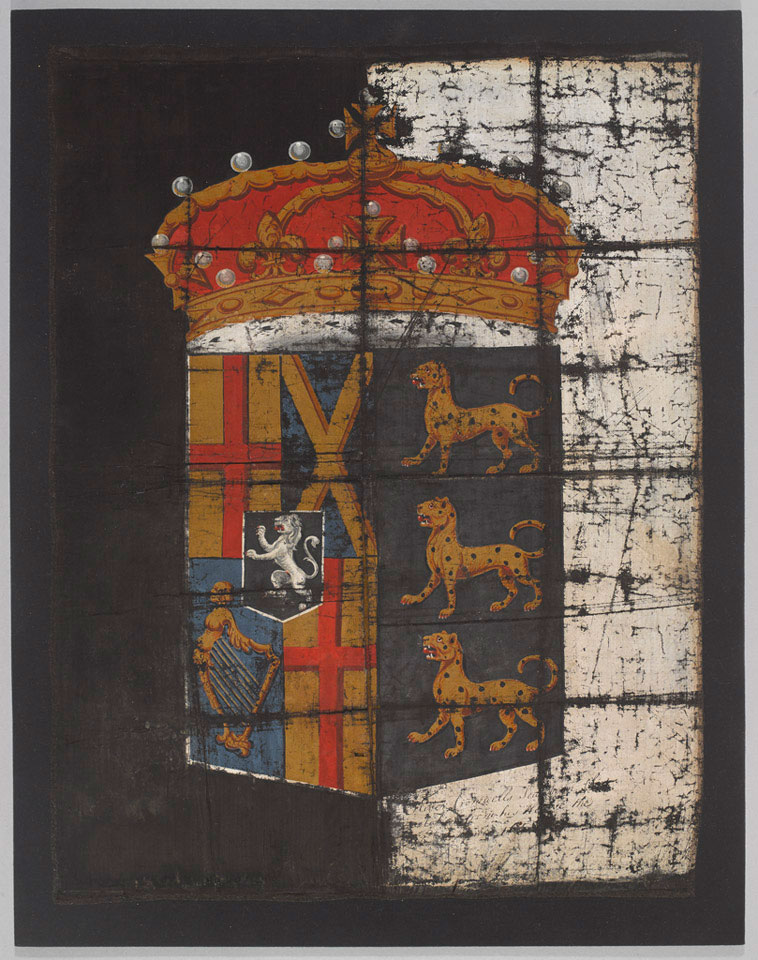 Painted and gilt taffety (or silk) escutcheon made for and displayed at Oliver Cromwell's funeral on the hearse that carried his coffin, 1658.

This silk escutcheon, a type of banner, was flown as part of the funeral process of Oliver Cromwell, Lord Protector of Lord Protector of the Commonwealth of England, Scotland, and Ireland. It was a public state funeral in Westminster Abbey to rival those of the monarchs before him, and in a ceremony that closely resembled that which had followed the death of James I. It cost £60,000 at the time - an astronomical sum.

But it was all an elaborate sham, a public statement of power over reality. Cromwell had died on 3 September 1658 at Whitehall in London from malaria. The plan had been to have his body lie in state for public viewing, but due to the effects of malaria on the body there were already enormous complications with this plan. A contemporary diarist and Member of Parliament, Thomas Burton, copying from the manuscript of the Reverend John Prestwich, Fellow of All Soul's College, Oxford, recorded that:

'His body, presently after his expiration, was washed and laid out; and being opened, was embalmed, and wrapped in a sere cloth six double, and put into an inner sheet of lead, inclosed in an elegant coffin of the choicest wood. Owing to the disease he died of, which, by the by, appeared to be that of poison, his body, although thus bound up and laid in the coffin, swelled and bursted, from whence came such filth, that raised such a deadly and noisome stink, that it was found prudent to bury him immediately, which was done in as private a manner as possible.'

With the body in no fit state for public viewing, it was decided to bury Cromwell privately in secret quickly, several weeks before his public funeral. On 20 September another sealed coffin was moved to Somerset House. A wood and wax effigy was created to lay alongside it, which was open to public view from 18 October. On 23 November - eight weeks after Cromwell's death - the funeral procession to Westminster Abbey took place carrying this coffin, which in all likelihood was empty, and Cromwell was again 'buried', but this time in an elaborate ceremony.

This escutcheon, or banner, lay on the hearse that carried the coffin. It is painted with Cromwell's arms as Lord Protector of the separate kingdoms of England, Scotland and Ireland, topped by the royal crown. Despite the fact that Cromwell resisted the efforts of Parliament to be crowned king in the aftermath of the execution of Charles I, he had accepted the title of Lord Protector, and he was still referred to as 'Your Highness'. It is painted black on one side to denote that Cromwell had died.

Of the 2,006 escutcheons that were hung or flown at Cromwell's funeral and his period of lying in state, only four have survived.

In January 1661, following the restoration of the monarchy and the accession of Charles II, Cromwell's corpse was exhumed from Westminster Abbey and subjected to a posthumous execution - a potent public act that recast Cromwell as a traitor.