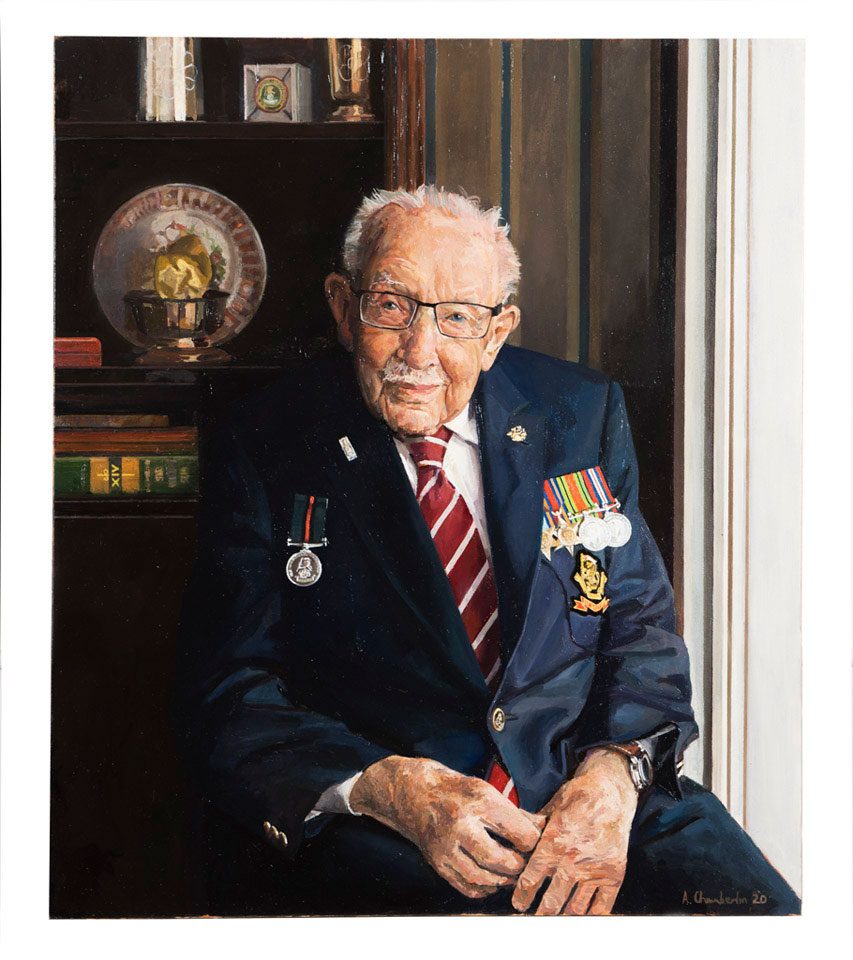 Oil on canvas by Alexander Chamberlin, 2020.

On 6 April 2020, during the COVID-19 pandemic, Second World War veteran Tom Moore began fundraising for NHS Charities Together. He aimed to raise £1,000 by walking 100 laps of his garden before his 100th birthday. With extraordinary support from the public he raised more than £38.9 million including gift aid and 'Captain Tom' became a household name. More than 1.5 million individuals from 163 different countries donated to his fundraising campaign. The Captain Tom Foundation aimed to create a positive impact around causes close to his and his family's hearts, from combating loneliness to championing education and equality; as well as supporting the work of NHS carers and frontline workers at a time of national crisis. Captain Tom fought against negativity and united the nation and inspired hope in the most challenging of times, guided by his motto, 'We have to keep on going'. In recognition of his achievement. He was made an Honorary Colonel by his Regiment on his 100th birthday and was knighted by Her Majesty The Queen at Windsor Castle on 17 July 2020.

Tom Moore explained his motivation for the fundraising campaign, 'When we started off with this exercise, we didn't anticipate we'd get anything near that sort of money. It's really amazing. All of them, from top to bottom, in the National Health Service, they deserve everything that we can possibly put in their place. They're all so brave. Because every morning or every night they're putting themselves into harm's way, and I think you've got to give them full marks for that effort. We're a little bit like having a war at the moment. But the doctors and the nurses, they're all on the front line, and all of us behind, we've got to supply them and keep them going with everything that they need, so that they can do their jobs even better than they're doing now.'

Tom Moore was brought up in Keighley and joined the Army in 1940, serving with The Duke of Wellington's (West Riding) Regiment. He was promoted corporal and then selected for officer training in 1941. He rejoined his regiment as a second lieutenant in the 9th battalion, just before it was converted into an armoured role as 146 Regiment Royal Armoured Corps. The 146th was assigned to 50th Indian Tank Brigade and embarked for India in August of that year. Since he was experienced with motorcycles, Moore was instructed to start a motor cycling course for the Brigade. He was promoted captain in July 1944 and served in Burma during the Far East campaign before returning to the United Kingdom to train as an instructor in armoured warfare. After he was demobilised, Tom Moore retained his links with his regiment, organising annual reunions for 64 years.

In this portrait, Moore wears his Duke of Wellington's Regiment blazer and tie with his Second World War medals: the 1939-45 Star, the Burma Star 1941-45, the Defence Medal 1939-45, and the British War Medal 1939-45. He also wears the Yorkshire Regiment Medal and a gold Blue Peter badge (both awarded in 2020). His Knight Bachelor's Badge is depicted still in its red box on the shelf behind him. Below it are copies of two well-known histories of the Burma campaign: George MacDonald Fraser's memoir 'Quartered Safe Out Here', and Field Marshal Sir William Slim's 'Defeat into Victory'.

The artist, Alexander Chamberlin, served as an officer in the Light Dragoons before becoming a professional portrait painter. He said 'I was awarded an Army scholarship and an Army bursary to study Fine Art at Newcastle University. Whilst at the time it might have been seen as unconventional for the Army to sponsor an art student, it is thanks to the Army that since leaving I have not looked back and been fortunate to enjoy such a fulfilling career doing something that I love. It really feels like things have come full circle - that one Army veteran has painted another, albeit a far more illustrious officer!'

Ever modest, this courageous Second World War veteran was stunned by the press attention that he received. With a twinkle in his eye he said, 'I can't believe all this fuss is for me - and only because I went for a little stroll!' Sadly, Captain Sir Tom Moore died on 2 February 2021 after contracting pneumonia and coronavirus. He is quoted as having said, 'I have often thought that when I die, I shall once more see all the people I've loved who have gone ahead. So, even if tomorrow is my last day, if all those I loved are waiting for me, then that tomorrow will be a good day too'.