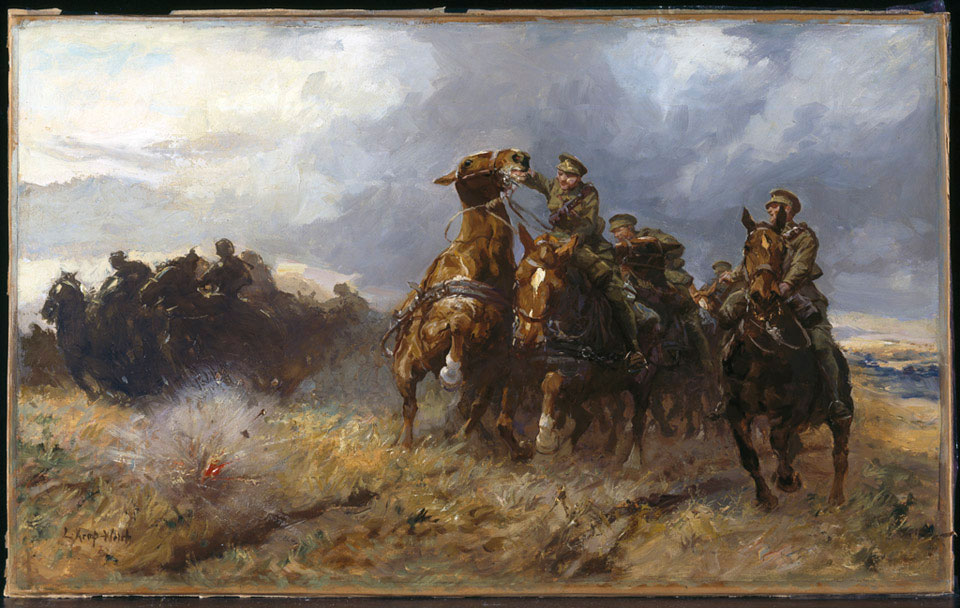 'Under Fire', a Gun Team of the Royal Field Artillery in training on Salisbury Plain, 1916

This is a study for the larger canvas 'Forward the Guns', which was exhibited at the Royal Academy in 1917 and purchased by the Chantrey Bequest for the Tate Gallery that year.

During World War One (1914-1918), the Royal Field Artillery Brigade, under the command of Colonel Edward George Cheke (1868-1923), was stationed at Bulford Camp on Salisbury Plain. It was here that the many new drafts of gunners were given intensive training before they were sent to the front.

A note by the artist on the back of the painting records that Colonel Cheke kindly enabled her to make many studies of the RFA at close quarters. She adds that, in order to paint this animated study, 'I was kneeling upon the ground, between the lines of galloping teams - smothered in dust and flying clods and made the scene a lightening quick sketch in oils'. As she worked on the plain, the artist was also watched by Colonel Cheke's daughter, Val, to whom she gave this study.

Lucy Kemp-Welch has been called the most gifted horse painter of the twentieth century. Widely respected by her contemporaries, she was elected the first President of the Society of Animal Painters. Another of her paintings was among the first works by a female artist to be purchased for the Tate Gallery. She was also well-known for her illustrations for the famous 1915 edition of Anna Sewell's children's book 'Black Beauty'.