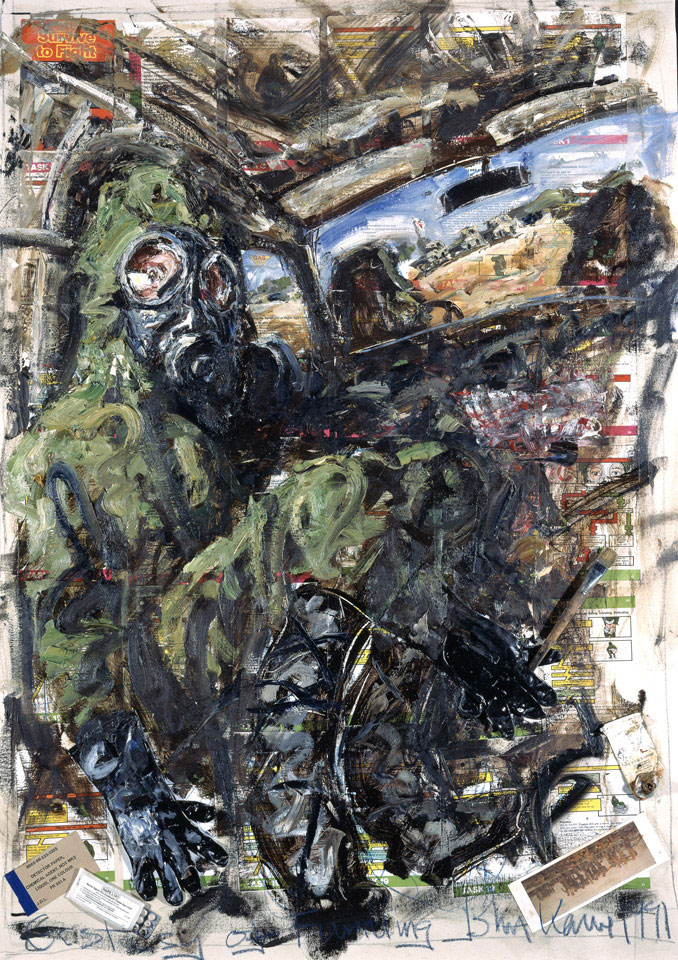 'Ecstasy of Fumbling' (Portrait of the Artist in a Gas Alert), 1991

Self-portrait of the artist wearing Nuclear, Biological and Chemical warfare (NBC) clothing and travelling in rear of an army vehicle, during a gas alert, Gulf War (1990-1991).

During the Gulf War (1990-1991), John Keane was commissioned by the Imperial War Museum's Artistic Records Committee to cover the crisis. Keane went beyond recording the facts of the conflict, confronting the viewer with the feelings and emotions that war provokes. Taking his title from Wilfrid Owen's World War One poem, 'Dulce et Decorum Est', and including a postcard of John Singer Sargeant's famous painting 'Gassed', 1918 (Imperial War Museum), Keane alludes to the awful use of chemical warfare in past conflicts.

Keane depicts himself wearing an NBC (nuclear, biological and chemical) protective suit, commonly called a 'Noddy' suit, during a gas alert. The incident took place during a press visit to a field hospital where, because of an Iraqi missile attack on a nearby town, the visitors were ordered to don their NBC suits. Keane, bewildered, frightened and never having practised dressing-drill, is shown with terrified eyes staring out from behind the respirator. Though the Gulf War was not the first occasion in which NBC suits had been worn by the British Army in combat, desert conditions made it especially uncomfortable.

The image is painted over the pages of 'Survive to Fight', the Army's instruction manual on NBC protection. The inclusion of other souvenirs such as NBC gloves, a paint brush, a tube of oil paint, a NAPS (Nerve Agent Pre-Treatment) Tablet Set and a detector paper for dangerous substances, reinforces the immediacy of the scene and brings home something of the reality of the artist's experience.