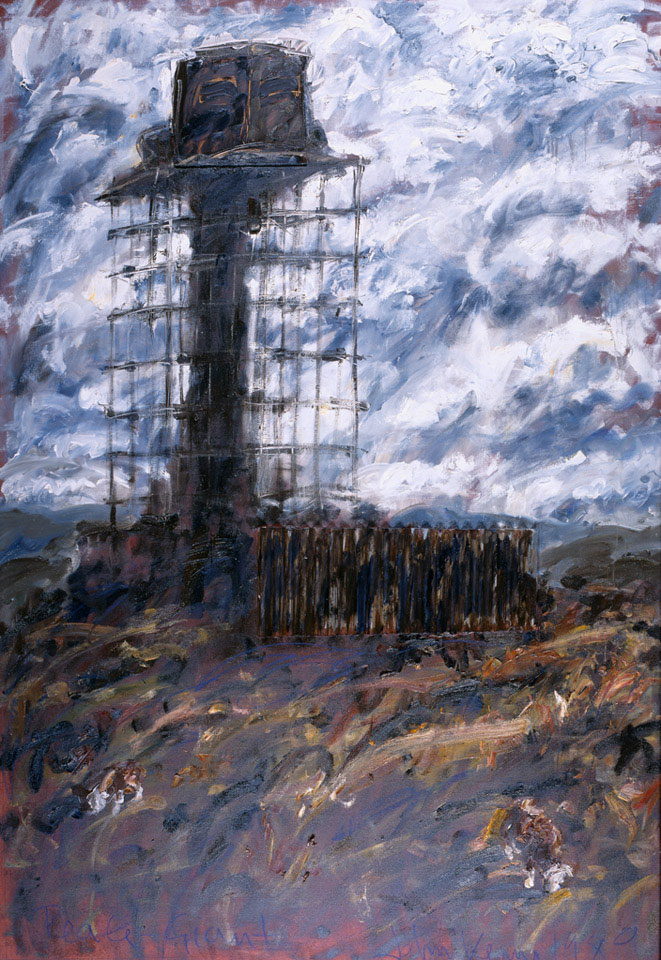 Embarking on a project to record 'the Troubles' in 1989, Keane spent a month in Northern Ireland. He interviewed representatives of all sectors of the community and attended marches and parades in order to improve his understanding of the situation. Using a camera and taking notes to record his experiences, he worked up a series of paintings on his return home, exhibiting them in 1990 under the title 'The Other Cheek?'.

Holding no fixed sympathies, Keane did not seek to offer solutions to the conflict, but aimed to record it as an impartial witness. Explaining his choice of subject matter for this project, he said 'It was all very well travelling around the world, but there was stuff that merited my attention on my own doorstep. It had been going on then, for twenty years, and, like most people, I had pretty much been content to ignore it.'

With its ironic title, 'Peace-Giant' is a stark image. It depicts one of the Army's observation towers in County Armagh, on the border with the Republic. Looming over cattle and sheep, this camouflaged observation post dominates the sky-line. At the base of the tower is a length of corrugated sheeting glued to the canvas, forming a physical boundary between the spectator and the painted scene. Keane also intended the sheeting to represent the political barriers between the Army and both communities in Northern Ireland, where corrugated iron was used to clad a number of 'sensitive' buildings. It came to be seen by many as a symbol both of defence and provocation.