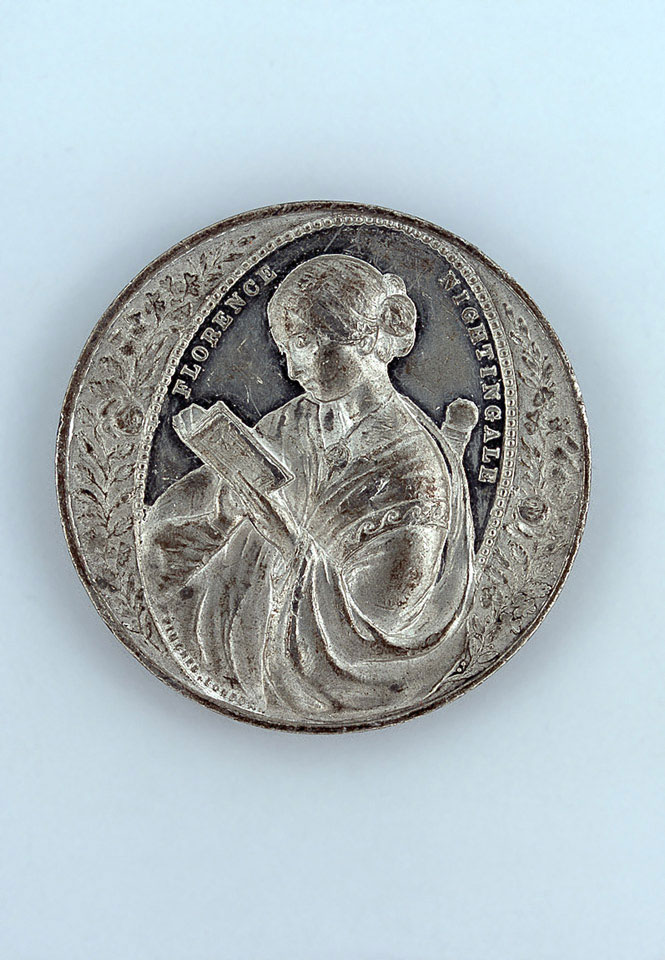 Following reports in 'The Times' of the soldiers' suffering in the Crimean War (1854-56), Florence Nightingale answered a government appeal for nurses and was appointed 'Superintendent of the Female Nurses in the Hospitals in the East'. Florence and her nurses improved medical and sanitary arrangements, set up food kitchens, washed linen and clothes, wrote home on behalf of the soldiers and introduced reading rooms.

Before Nightingale nursing was not considered a respectable profession. With the exception of nuns, the women who worked as nurses were often ill trained and poorly disciplined. Most were working-class. Florence was determined to encourage educated, 'respectable' women into nursing. Her work in the Crimea set the standards for modern nursing and helped transform its public image.

The obverse of this medal depicts a half-length figure of Florence reading a book, within a beaded oval frame. On either side are sprays of roses, thistles and shamrocks. The reverse carries an oval badge flanked by palm sprays and bearing the words: 'BLESSED ARE THE MERCIFUL'. Above it are three mullets and at the centre is a cross in splendour surmounted by a crown and the letters VR. Below is a scroll inscribed: CRIMEA, and the around the edge of the medal the inscription: 'AS A MARK OF ESTEEM AND GRATITUDE FOR HER DEVOTION TO THE QUEEN'S BRAVE SOLDIERS'.