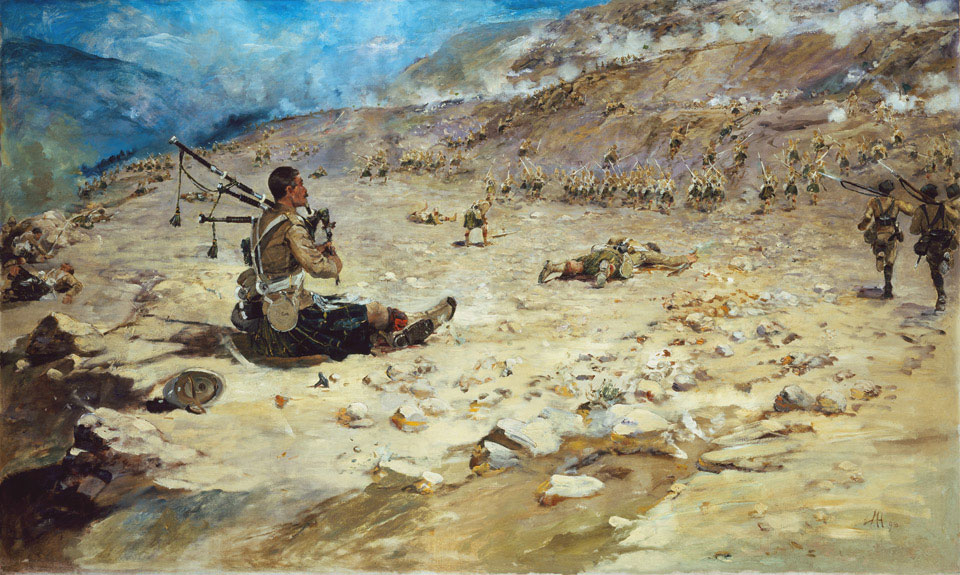 Reaction was swift: the Tirah Expeditionary Force was sent to suppress the rebellion and re-secure the pass. The British captured the precipitous heights on 18 October, but had to abandon the position because of the difficulty of keeping it supplied. This necessitated a second attack on 20 October and, during the fierce and prolonged attack by British Infantry and Gurkhas, the Gordon Highlanders earned two Victoria Crosses. One of the recipients, Piper George Findlater (1872-1942), was honoured for playing the regimental march, despite the fact that he had been shot in both feet and was unable to stand. Under heavy enemy fire, he sat up and played the bagpipes to encourage his comrades in their difficult, uphill attack. His fellow VC recipient, Private Edward Lawson, was honoured for rescuing a wounded officer, despite being wounded himself. A third VC was won in this action by Private Samuel Vickery, the Dorsetshire Regiment.

Piper Findlater was decorated with the Victoria Cross by Queen Victoria on 14 May 1898, at the Military Hospital, Netley, Hampshire. The incident captured the public imagination and Findlater became one of the best-known VC heroes, possibly due to his later career re-enacting his finest hour on the music hall stage. Questions were raised about this in the House of Commons and it was decided to award all further recipients of the Victoria Cross an annuity of £50, to prevent the need to hire themselves out. Queen Victoria offered Findlater the respectable post of lodge keeper at Windsor.