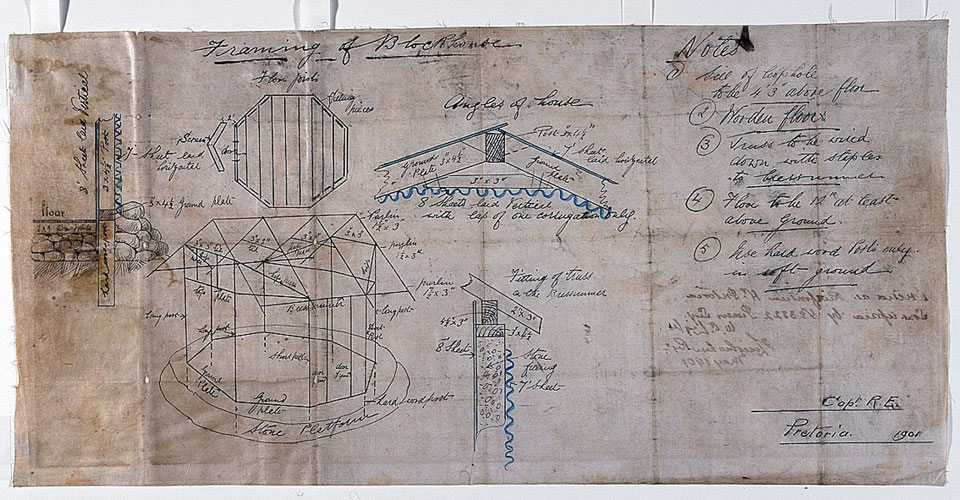 Plan and elevation of the octagonal blockhouse erected at Rietfontein, 29 km west of Pretoria, by Pioneer Sergeant W C Leigh, 2nd Battalion, Lincolnshire Regiment in May 1901.

About February 1901, Major S R Rice, commanding 23rd Field Company, Royal Engineers, had the idea of fixing corrugated iron to both sides of a wooden frame and filling the intervening space with shingle; eight frames, provided with loopholes, were fitted together and roofed to form an octagonal blockhouse. Soon after, Rice introduced the circular blockhouse, utilizing pre-curved sheets of corrugated iron.

This pattern was easier to manufacture, required to less materials and transport, and was simpler to fit together in the field - an octagonal blockhouse, like that shown in this drawing, took eight days to construct, while the circular type could be erected in only three or four days. The circular blockhouse was also stronger than the octagonal version and soon became the general pattern. Manufactories were established at Middelburg, Pretoria, Bloemfontein and other places, where materials for blockhouses were prepared and sent out ready for erection when required.