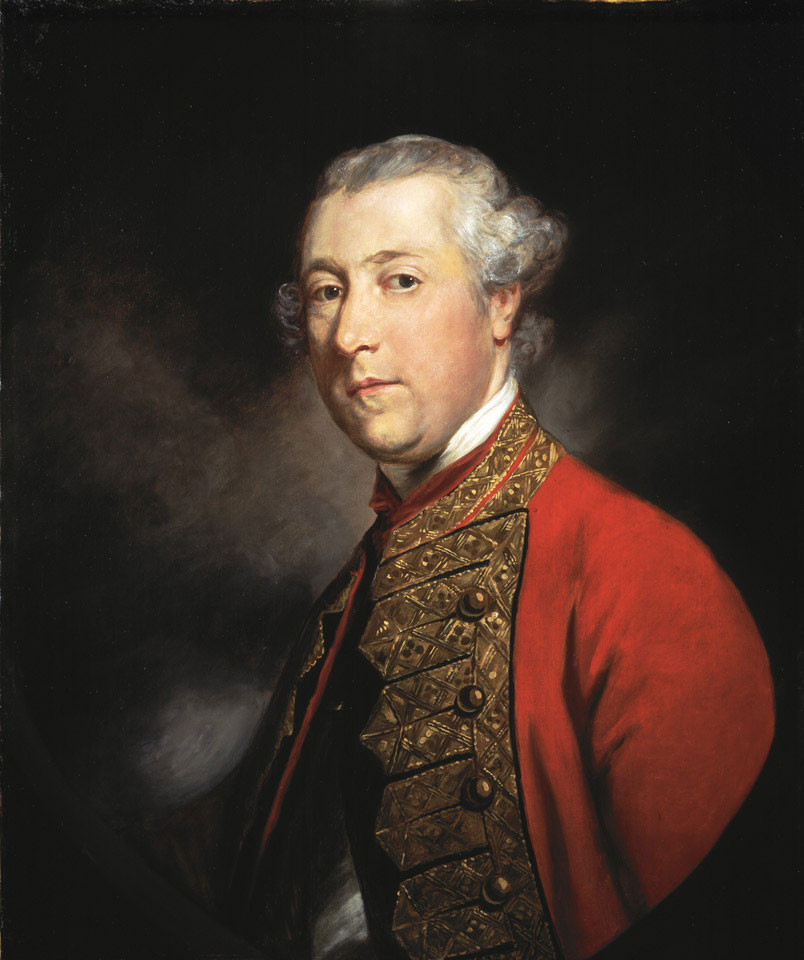 George Howard (1718 (c)-1796) is shown here wearing a state coat, which was a heavily decorated garment in use from about 1750-1770, prior to the standardisation of dress for general officers in the late 18th century.

Howard's military career started with his commission as an ensign in the Twenty-fourth Regiment of Foot in 1725, at the age of about 7, although he did not join his regiment until 1736. As Lieutenant-Colonel, Howard commanded the Third Regiment, or the Buffs, at the Battles of Fontenoy (1745), Falkirk (1746) and Culloden (1746) and, during the War of Austrian Succession (1742-48), at the Battle of Lauffeldt. During the Seven Years' War (1756-63), he commanded a brigade under Lieutenant-General John Manners, Marquess of Granby (1721-1770). In the later stages of the conflict, Howard was appointed Intendant-General to co-ordinate the whole administration of the Army. It was during this period that he sat for his portrait by Sir Joshua Reynolds. From 1771 to 1775, the painter James Northcote was the pupil and resident assistant of Reynolds.

Colonel of the 7th Dragoons from 1763 and the 1st Dragoon Guards from 1779, Howard also enjoyed a political career as an MP, becoming a Privy Councillor in 1795. He was Governor of Minorca from 1766-1768, the Royal Hospital Chelsea from 1768-1795 and of Jersey from 1795 until his death. In 1793 he was made a Field Marshal but failed to obtain the vacant appointment of Commander-in-Chief of the Army. The memoirist Sir Nathaniel Wraxall wrote of Howard that he was 'a man universally esteemed, highly bred and a gallant soldier: but he owed his military Elevation and Employment, more perhaps to Royal Favour, than to any distinguished talents of professional services'.