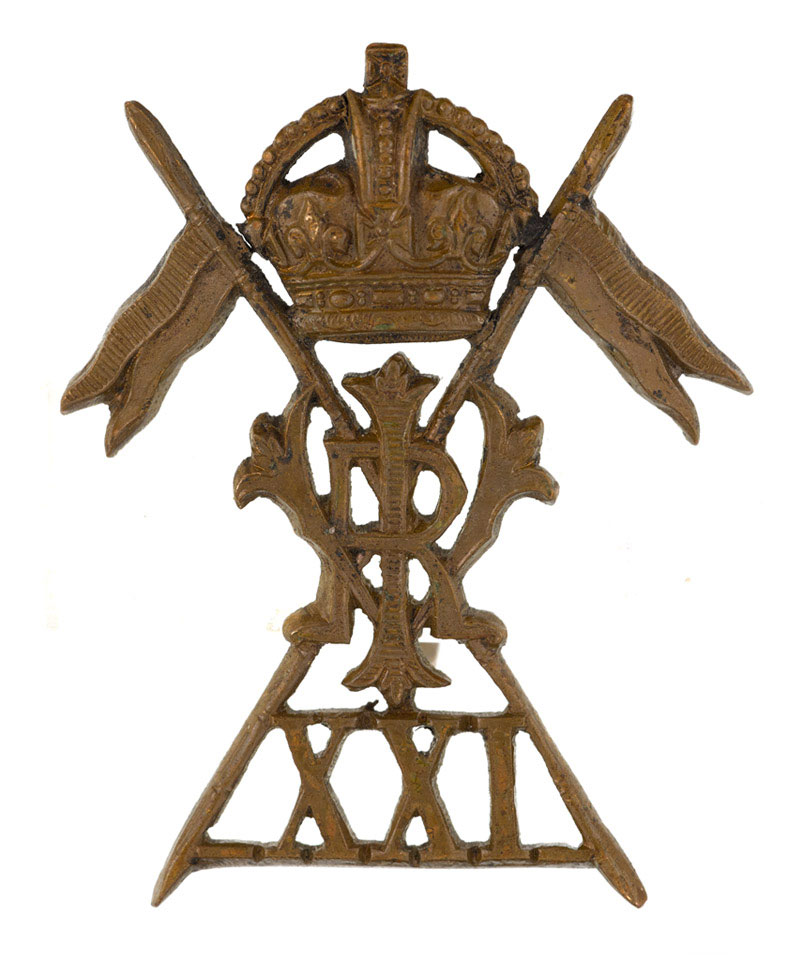 This bronze badge consists of crossed lances over the pierced royal cypher of Queen Victoria (who was also the Empress of India) 'VRI'. Below this is the Roman numeral XXI (21). Above the cypher there is a monarchial crown.

In 1858, during the Indian Mutiny (1857-1859), the 3rd Bengal European Light Cavalry was raised by the East India Company. With the loyalty of Indian cavalry soldiers in doubt, this new unit was entirely made up of Europeans. Within a year, the British Government had disbanded the Company and taken control of all its army units. Some of these formed the core of a new Indian Army. But the 3rd Bengal European Light Cavalry was transferred to the British Army and renamed the 21st Regiment of Hussars in 1862.

Three other light cavalry units with the number 21 had previously been raised and disbanded by the British Army. But this regiment had no direct link to any of them. It spent most of the next three decades in India and at home stations. Part of the unit also served with the Anglo-Egyptian camel force in the Sudan in 1884.

In 1897, the regiment was converted from hussars to lancers. A year later, it took part in the famous cavalry charge at the Battle of Omdurman during the 2nd Sudan War (1896-1899). Its conduct there earned it the title 'Empress of India's'. Winston Churchill - an officer with the 4th Hussars at the time - was also attached to the 21st Lancers during this battle.

After World War One, the Regiment was brought back to Britain from India. It was disbanded in 1921, but one squadron was reconstituted in 1922 and immediately amalgamated with the 17th Lancers (Duke of Cambridge's) to form the 17th/21st Lancers.