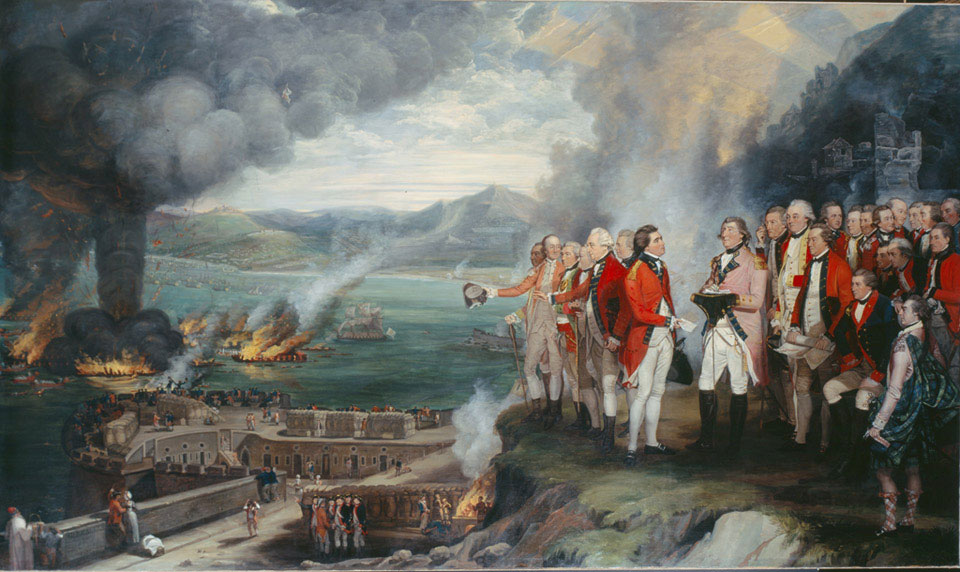 General Eliott and his Officers observing the destruction of the Floating Batteries, Gibraltar, 14 September 1782

When Spain entered the American War of Independence (1775-1783) in 1779, it set about besieging the British garrison of Gibraltar, commanded by General Augustus Eliott (later 1st Baron Heathfield) (1717-1790).

The siege reached a crisis point in September 1782, when the weakened garrison was bombarded both from the landward side and also close-to from the sea. The Spanish fleet included a number of specially-designed floating batteries, ships built with double-hulls for protection, carrying heavy artillery. Risking death from exploding cannon, in a daring and dangerous move British gunners fired back with red-hot shot. This set the batteries on fire, causing two to explode. The Spanish fleet retreated and the garrison was able to keep up its resistance until the close of hostilities in 1783.

This picture is important as a realistic contemporary record of an event of considerable strategic significance to Britain. The artist, George Carter, took particular trouble to paint the heroic action as true to life as possible. As well as having the advice of Sir Roger Curtis, who was present and had rescued many drowning Spanish sailors, Carter went to Gibraltar to make portrait studies from life before completing this painting in 1784. To his great disappointment, he failed to win the important City of London commission for a large painting of the siege. It went to his rival, the American artist, John Singleton Copley. However, Copley's enormous painting (Guildhall Art Gallery, London) owes much to Carter's composition and was not completed until 1791.