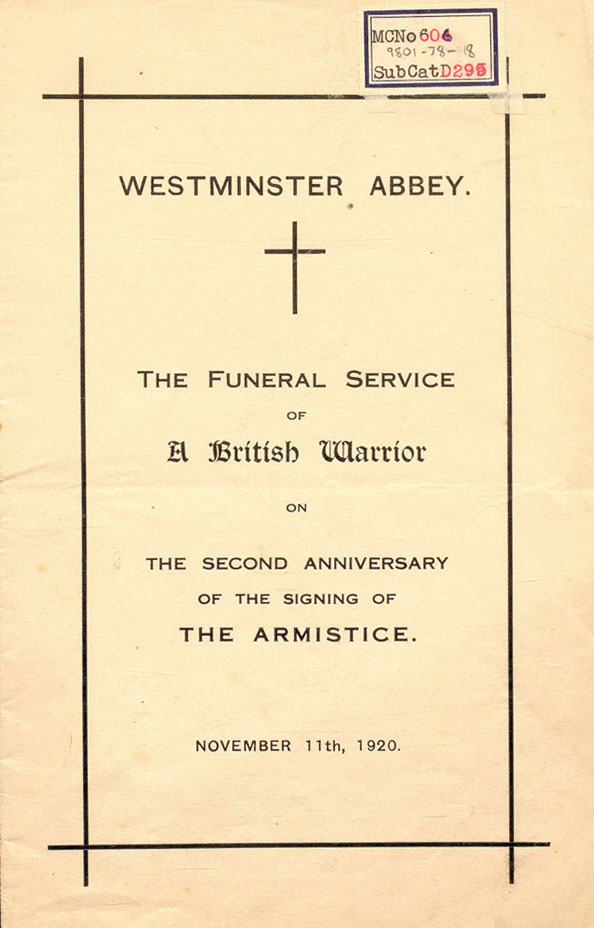 Order of service for the funeral service of the Unknown Warrior, Westminster Abbey, 11 November 1920

From the papers of Dame Florence Leach (Dame Simpson).

The funeral of the Unknown Warrior was described by 'The Times' as 'the most beautiful, the most touching and the most impressive that in all its long eventful story, this island has ever seen'. The service was conducted by Dean Herbert Ryle in the presence of royalty, senior politicians and the highest ranked officers of the military.

The coffin was brought into the Abbey through the north door and was carried up the nave, which was flanked by an honour guard of 96 highly decorated servicemen, including 75 holders of the Victoria Cross. The choir sang 'Lead Kindly Light' as the coffin was lowered into the grave, following which the King sprinkled it with earth from a Western Front battlefield.

The congregation included nearly 1,000 widows and mothers of servicemen who had died in the war. In a letter to a newspaper, one bereaved mother described how 'If tears came to me during the service, as they came to many, they were mingled with gladness, for in that beautiful building and that music that thrilled my soul, I felt very near to my lost boys'.