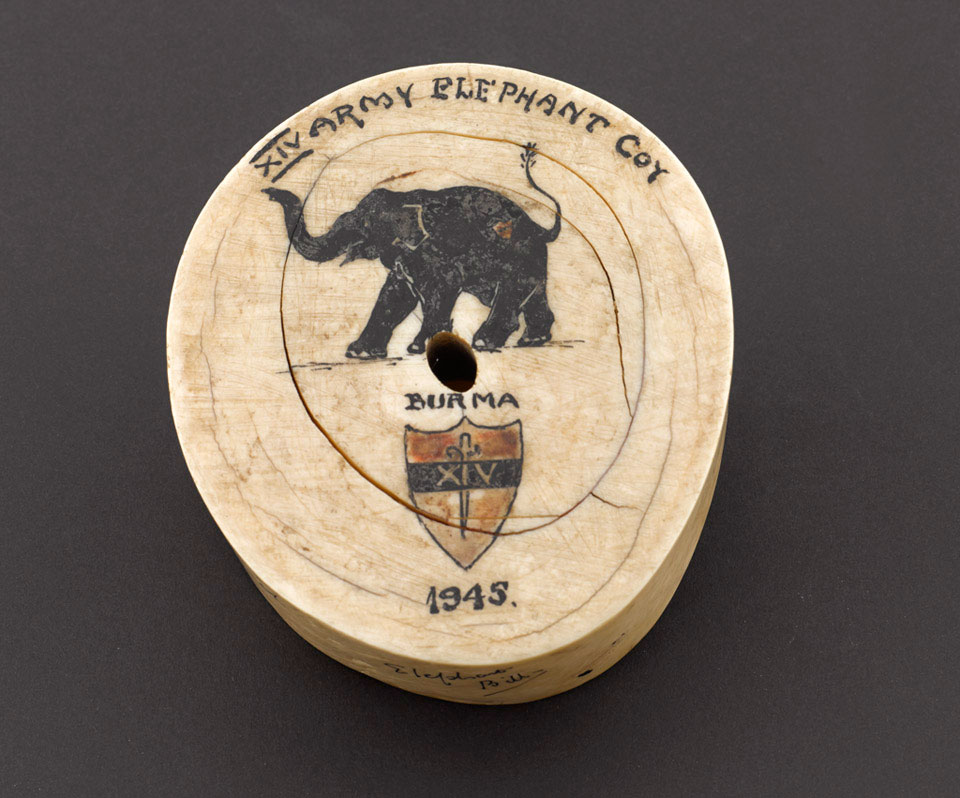 This ornament, made from a cross section of an elephant tusk, commemorates the service of the Elephant Company of The Royal Indian Engineers in Burma during World War Two.

Elephants were used extensively in the Burma campaign to carry and distribute supplies, build bridges, and as transport. They proved better suited to working in the jungle than mules.

This ornament is significant for the names that are signed on the side. One of these, James Howard Williams, is more famously known as 'Elephant Bill'.

Williams had fought in the First World War, but moved to Burma afterwards, where he became a forester. He quickly learned the language and built up his knowledge of the country, people and the forestry trade, including the use of elephants in transport and logistics in the jungle.

In 1942 Williams rejoined the Army, and after conducting timber surveys in Bengal and Assam he was posted to the staff of the 14th Army as Elephant Advisor to the Elephant Company of the Royal Indian Engineers.

Williams advocated for the use of elephants in the construction of infrastructure, as well as a form of transport, in the harsh jungle conditions. He earned the nickname 'Elephant Bill', which was also the title of his 1950 memoir. In the introduction, Field Marshal Sir William Slim wrote about the use of elephants, 'They built hundreds of bridges for us, they helped to build and launch more ships for us than Helen ever did for Greece. Without them our retreat from Burma would have been even more arduous and our advance to its liberation slower and more difficult'.

After the War, Williams left Burma and retired to Cornwall. He died in 1958, aged 60.