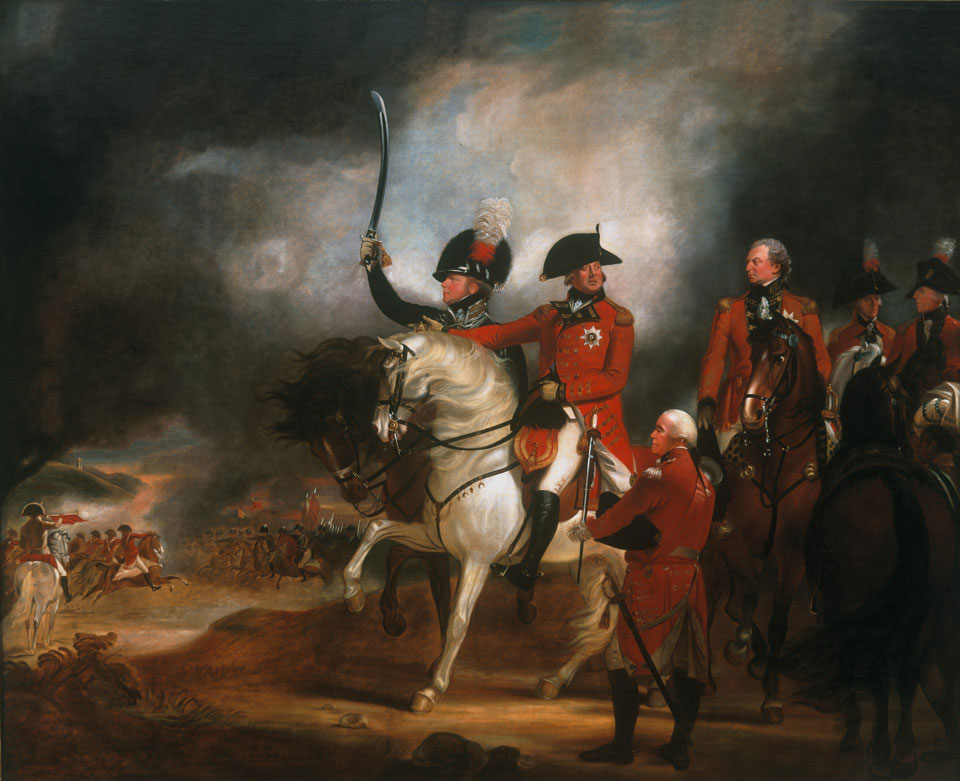 In an imaginative reconstruction of a review held in Hyde Park in London in 1797, the two cavalry regiments engage in mock combat, watched by the royal party. The King rides his favourite horse, 'Adonis', while behind him, brandishing a sabre, is the Prince of Wales in his uniform as Colonel of the 10th (or the Prince of Wales's Own) Regiment of (Light) Dragoons.

To the King's left is his second son, Frederick, Duke of York, Commander-in-Chief of the Army. Beside him is Lieutenant-General David Dundas, Quartermaster-General, who commanded camps of exercise at Weymouth and Windsor. On the extreme right is Major-General Philip Goldsworthy, ADC and Equerry to the King. In the foreground stands General Sir William Fawcett , Colonel of the 3rd (or Prince of Wales's) Regiment of Dragoon Guards.

This painting is a slightly smaller copy of the lost canvas by Sir William Beechey, which was commissioned by the King and exhibited at the Royal Academy in 1798 (No 178). That painting was destroyed in the fire at Windsor Castle in 1992.

There are other versions of this picture without the Prince of Wales and it is clear that he was not included in preliminary sketches. There is even a story that the figure of the Prince was added later at the request of Queen Charlotte which caused the irate King to order the painting to be destroyed. However, there are recorded sittings of the Prince to Beechey which shows this to be unfounded.