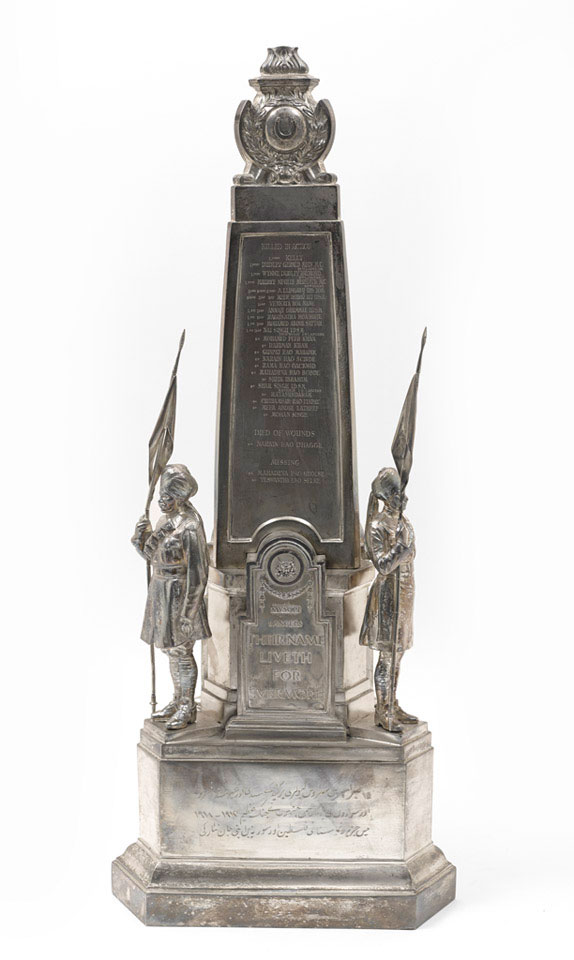 This silver centrepiece takes the form of the Teen Murti Memorial in New Delhi. The memorial was built in 1922 and inaugurated on 8 March 1924 by Lord Reading, the then Viceroy of India. The memorial stands outside the Teen Murti Bhavan, the former residence of India's first Prime Minister, Jawaharial Nehru. The memorial's sculpture was the work of Leonard Jennings.

The memorial obelisk guarded by the figures of three Indian lancers records and commemorates the officers and men of the 15th Imperial Service Cavalry Brigade who lost their lives in the Middle East campaign during World War One (1914-1918). The three figures represent soldiers of the Mysore Lancers, Hyderabad Lancers and the Jodhpur Lancers. The inscriptions on the memorial refer to regiments from Hyderabad, Mysore and Jodhpur and detachments from Bhavnagar, Kashmir and Kathiwar and the places they served, including the Suez Canal, Gaza, Jerusalem, Jordan Valley, Haifa, Damascus and Aleppo.