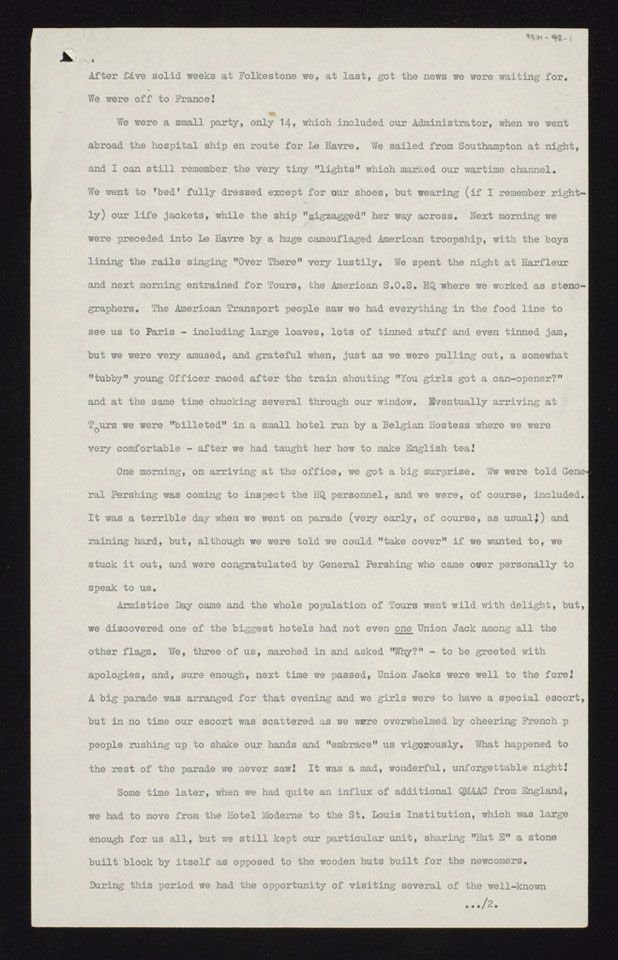 Cunningham was from Kelso, Roxuburghshire. Her letter states:

'After five solid weeks we arrived at Folkestone, we, at last got the news we were waiting for. We were off to France! We were a small party, only 14, which included our Administrator, when we went aboard the hospital ship en route for Le Havre. We sailed from Southampton at night and I can still remember the very tiny 'lights' which marked our wartime channel. We went to bed fully dressed except for our shoes, but wearing (if I remember rightly) our life jackets, while the ship ''zigzagged'' her way across.

Next morning we were proceeded into Le Havre by a huge camouflaged American troopship, with the boys lining the rails singing ''Over There'' very lustily. We spent the night at Harfleur and next morning entrained, the American SOS. HQ where we worked as stenographers. The American Transport people saw we had everything in the food line to see us to Paris - including large loaves, lots of tinned stuff and even tinned jam but we were very amused, and grateful when, just as we were pulling out, a somewhat ''tubby'' young officer raced after the train shouting ''You girls got a can-opener?'' and at the same time chucking several through our window. Eventually arriving at Tours we were ''billeted'' in a small hotel run by a Belgium Hostess where we were very comfortable after we had taught her how to make English tea!

One morning, after arriving at the office, we got a big surprise. We were told General Pershing was coming to inspect the HQ personnel, and we were, of course, included. It was a terrible day when we went on parade (very early, of course, as usual!) and/ raining hard but, although we were told we could "take cover" if we wanted to, we stuck it out, and were congratulated by General Pershing who came over personally to speak to us.

Armistice Day came and the whole population of Tours went wild with delight, but, we discovered one of the biggest hotels had not even one Union Jack among all the other flags. We, three of us, marched in and asked "Why?"- to be greeted with apologies, and, sure enough, next time we passed, Union Jacks were well to the fore!

A big parade was arranged for that evening and we girls were to have a special escort, but in no time our escort was scattered as we were overwhelmed by cheering French people rushing up to shake our hands and "embrace" us vigorously. What happened to the rest of the parade we never saw! It was a mad, wonderful, unforgettable night!

Some time later, when we had quite an influx of additional QMAAC from England, we had to move from the Hotel Moderne to the St Louis Institution, which was large enough for us all, but we still kept our particular unit,sharing "Hut E" a stone built block by itself as opposed to the wooden huts built for the newcomers.

During this period we had the opportunity of visiting several of the well-known Chateaux of the Loire Valley, and also of getting a spot of home leave. When the time came we were very sorry to leave Tours, but on our way North to rejoin the British Forces we, still the same unit, arrived at a small camp at Monchy Cayeaux, near St. Pol. We were there only a short time and lived in Nissan huts, the "Ablutions" being discretely tucked away among the trees a short distance from the huts. The baths were "tin" tubs which had to be filled by hand from hot and cold tanks.

One evening I walked down to have a bath and found one of the German POW orderlies there. Usually, when one entered the bathroom, the orderly went out. This one did not. He came up to me and said something I did not understand. I shook my head and waited for him to go, but instead he came closer and said the same thing but more deliberately. All I could make out was something that sounded like "Kalt" so, more than half scared, I took to my heels and ran back to our hut where I burst in and said " I think that Hun in the bathhouse is threatening to kill me." "Jimmy," who spoke German, roared with laughter and said, "You clown!- all he wanted/ to know was whether you wanted hot or cold water in your bath!!!"

I am now a Granny, over the "allotted span," but I would not have missed my service in the QMAAC for anything - even thinking about it makes me young again. Margaret Yelf, (Mrs)'