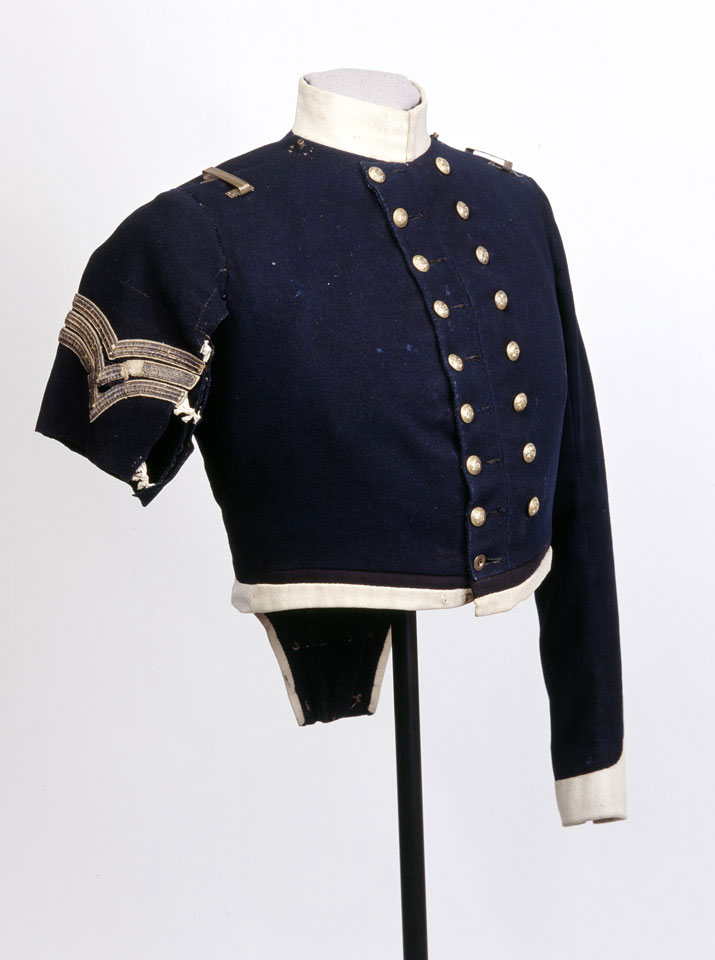 Short-tailed coatee worn by Sergeant Frederick Peake of the 13th (Light) Dragoons at the Battle of Balaklava, 1854

The damage to the coatee is believed to have occurred during the Charge of the Light Brigade, when his arm was broken by canister shot. The lower right sleeve where Peake was wounded has been cut away and the upper sleeve cut and fastened with two white tapes. The upper left sleeve is also damaged. The coatee has been let-out at the sides, lengthened, and the buttons moved, probably to ensure that it fitted Sergeant Peake in later life when he attended dinners of the Balaklava Commemoration Society.

Frederick Peake (1828-1906) was born in Dublin where he enlisted into the 13th (Light) Dragoons in November 1846, aged eighteen. After service in the United Kingdom he embarked with the Army of the East in 1854 and was promoted sergeant during the voyage. After being injured during the Charge of the Light Brigade, Peake was evacuated first to Scutari and invalided home on 20 December 1854 and remained throughout 1855 at the Invalid Depot at Chatham. In January 1856 as a result of his wound, Peake was discharged from the Army with a pension of 1/3 d per day. Because he could read and write, Peake secured a post as a military stores clerk with an increased pension. He nonetheless encountered financial difficulties and before his death in 1906 had sought relief from the Light Brigade Survivors' Fund and the Royal Patriotic Fund.