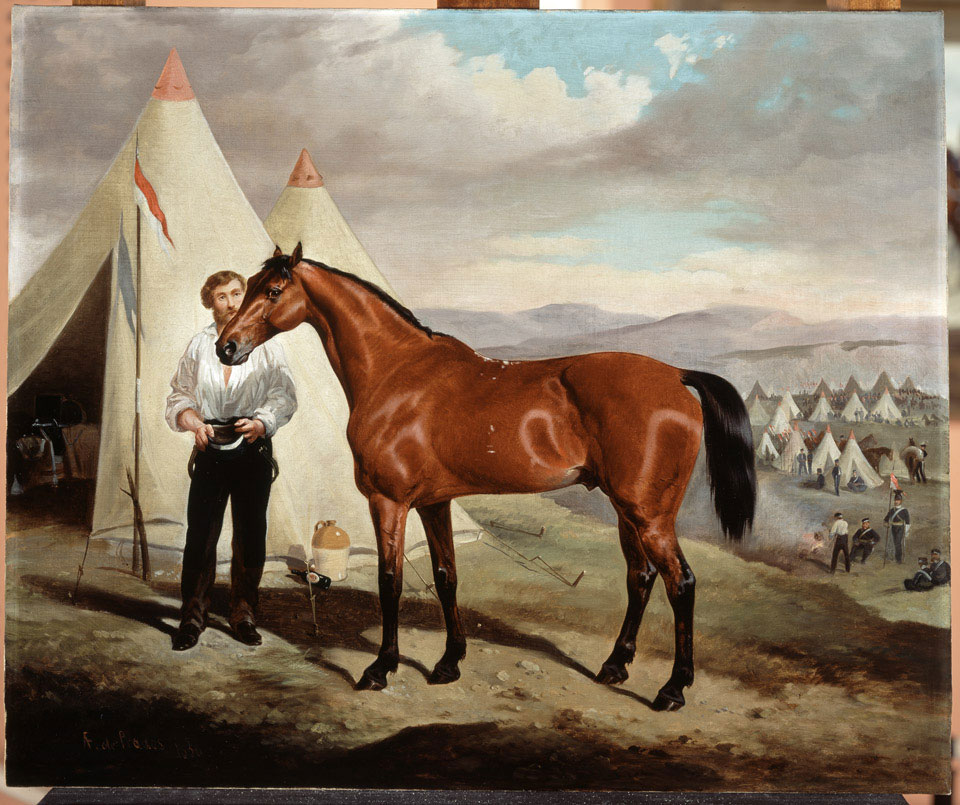 'Briggs' was a survivor of the famous Charge of the Light Brigade at the Battle of Balaklava on 25 October 1854. A bay stallion with black stockings 'Briggs' measured 15 hands. He was named after a family servant, but after showing remarkable bravery during the battle, he was unofficially knighted, 'Sir' Briggs. His owner, Captain the Honourable Godfrey Charles Morgan (later Viscount Tredegar, 1831-1913), commanded a squadron of the 17th Regiment of Light Dragoons (Lancers) in the famous charge, during the Crimean War (1854-1856).

Due to a misinterpretation of orders, the British Light Cavalry Brigade charged Russian artillery stationed at the end of a long valley, while exposed to Russian fire on both sides. On reaching the Russian guns, they rode through them to charge Russian cavalry beyond. After some fighting, the remnants of the force returned along the 'Valley of Death' (as described in Tennyson's poem), under continued fire. The number of horses killed was far higher than the 113 human lives lost in the charge. Of the 643 animals paraded that morning, over 370 were killed in action and another 85 returned, wounded.

A prominent Welsh landowner, Morgan sold his commission in January 1855 but continued to serve in the Royal Gloucestershire Yeomanry until 1875. He was Honorary Colonel of the Royal Monmouth Engineer Militia from 1885 and Member of Parliament for Breckonshire from 1858 to 1875. When 'Sir Briggs' died in 1874 he was commemorated with a memorial in the grounds of Tredegar Park, his master's home in Wales.

The artist, de Prades, probably visited the Crimea in 1854, when he may have made the preliminary sketches for this oil. He is particularly noted, both for his equestrian and sporting paintings, and for scenes from the Crimean War.