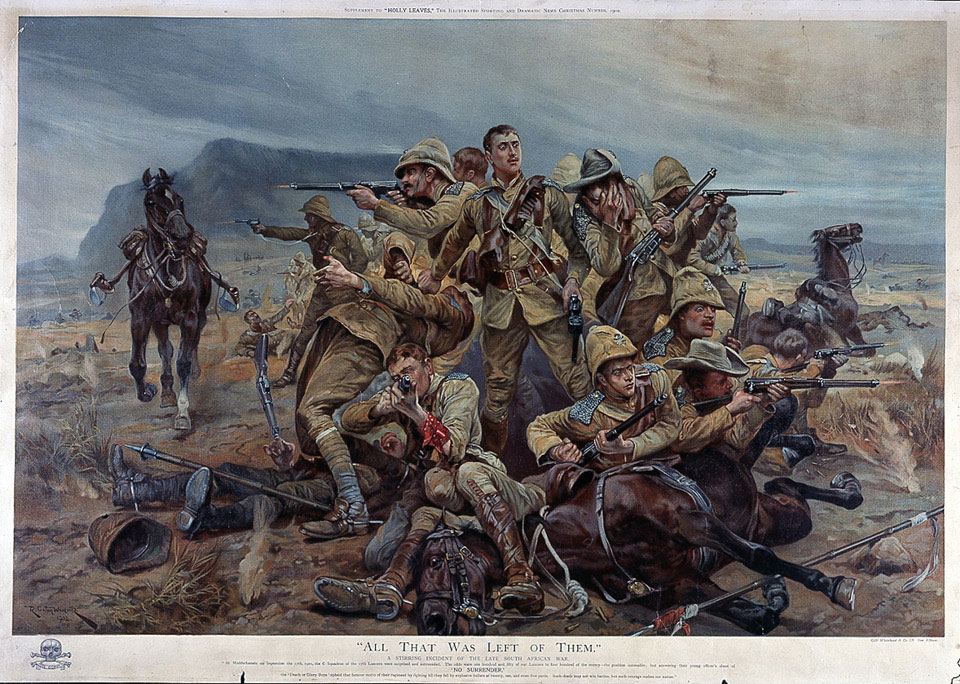 Chromolithograph after Richard Caton Woodville (1856-1927), 1901. Published by Gilbert Whitehead and Company Limited as a supplement to 'Holly Leaves Christmas Number', 1902.

On 17 September the presence of a squadron of the 17th (The Duke of Cambridge's Own) Lancers at Modderfontein farm, 25 km north-west of Johannesburg, was reported to General Jan Smuts, whose commando was starving and short of horses. Smuts ordered a section forward to locate the British cavalry, while he brought up the rest of his men. The advance section ran into a troop of the 17th Lancers which at first mistook the khaki-clad burghers for British troops from another column. When the Boers opened fire, bringing down several of the Lancers, the survivors withdrew to a low, stony ridge further down the road which was held by the rest of the squadron armed with rifles, a machine gun and a mountain gun.

At this point, Smuts arrived with the main body of his commando and attacked the Lancers from a hill to their rear. Close-quarter fighting developed in which the gun crew were killed; the rest of the squadron fought to the finish, though one troop, posted a little further away, was able to escape after expending all its ammunition, the last few rounds being used to shoot their horses to prevent them falling into the hands of the Boers. The total strength of the 17th Lancers engaged was 140, of whom four officers and 32 men were killed and four officers and 33 men wounded.