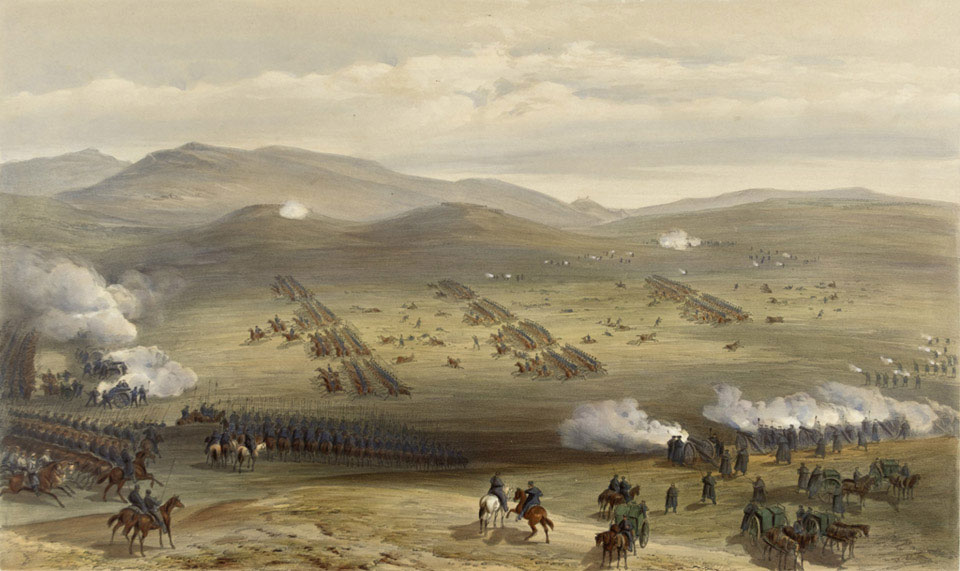 'Charge of the Light Cavalry Brigade. 25th Oct. 1854. Under Major-General the Earl of Cardigan'

Coloured tinted lithograph by E Walker, 1855. One of 40 lithographs from 'The Seat of War in the East - First Series' after William Simpson, published by Paul and Dominic Colnaghi and Company, 1 March 1855.

Of all British military engagements during the 19th century, the Charge of the Light Brigade at the Battle of Balaklava remains the most notorious. One of the most spectacular of military disasters, surrounded by controversy as to its cause, the tragic charge of the British light cavalry regiments along the 'valley of death' under murderous fire from the Russian guns was genuinely heroic. The legend of the 'gallant 600' remains deeply rooted in the public mind today, some 150 years later.

Due to a misinterpretation of orders, the British Light Cavalry Brigade commanded by the Earl of Cardigan charged Russian artillery stationed at the end of a long valley, while exposed to Russian fire on both sides. On reaching the Russian guns, they rode through them to charge Russian cavalry beyond. After some fighting, the remnants of the force returned along the 'Valley of Death' (as described in Tennyson's poem), under continued fire. The number of horses killed was far higher than the 113 human lives lost in the charge. Of the 643 animals paraded that morning, over 370 were killed in action and another 85 returned, wounded.