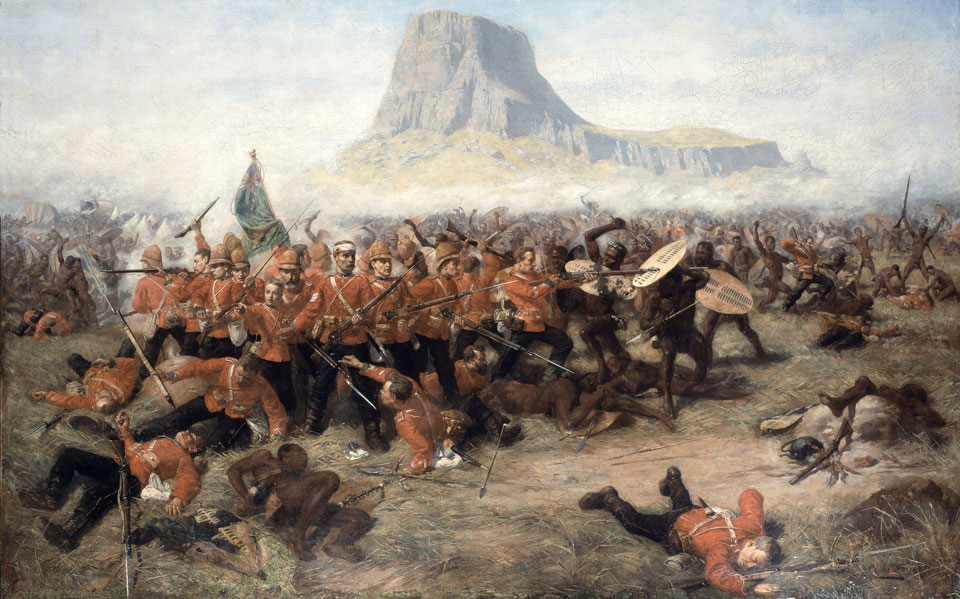 This painting illustrates one of the worst disasters suffered by the British Army in the late nineteenth century.

In a coercive move to 'persuade' the Zulus to cooperate in a federation of British colonies and Boer republics in South Africa, a field force under Lieutenant-General Lord Chelmsford entered Zululand in 1879. On 20 January a temporary base camp was established under the distinctive hill of Isandlwana. Two days later, Chelmsford marched out part of his column to find a reported concentration of Zulu forces. Just after midday, the remaining garrison, mainly six companies of the 24th (2nd Warwickshire) Regiment of Foot (later the South Wales Borderers), was attacked by about 25,000 Zulus. The garrison attempted to form an extended firing line some distance forward and at right angles to the camp, but this was soon outflanked. Attempting to fall back, the troops were forced to form several small squares, and fought to the death. The official casualty return listed 858 Europeans and 471 Africans killed.

Charles Fripp arrived in Zululand in March 1879 as the 'special artist' for 'The Graphic'. Not an eye-witness, he reconstructed this event as more heroic than the shambles it must have been. The painting made little impact when it was exhibited in 1885, as 'The last stand at Isandhula', since the event was neither glorious nor topical. However, attitudes and interests have changed, particularly since the film 'Zulu' appeared in 1964. It is now the most popular image in the National Army Museum.